We Get Back What We Give Out 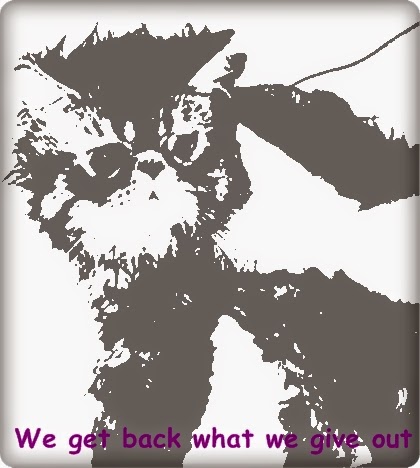 Here's a touching email I received.


"I have been reading your articles for several months and have to agree with you about life in respect of us getting back what we give out. This has also produced coincidences for me as well.

Towards the end of last year my husband suddenly died and I felt very lonely. I'm 78 years old and we had been together for 54 years, doing everything together, but suddenly I was alone. I do have two sons but they lived far from what was once their home.

I was in despair after he died but eventually gave myself a good talking to and decided I had to go on. I decided I would try to do something every day for someone else, much as you suggested in one of your articles. I also remembered from when my boys were young and were Boy Scouts. They were told to help someone every day and to tie a knot in their neckerchief when they had.

I baked some cakes and took them to a neighbour who was very surprised at me doing this. It brought a smile to her face which made me smile. That night I wished so much that I had a close friend and was in tears.

The next morning there was a scratching at my door and standing there was a very bedraggled tabby cat. I didn't want a cat but I let her in and fed her some chopped meat. She then curled up on my settee and went to sleep.

I asked about but no one had lost a cat and then I realised that I had my friend. Not what I expected but Whisky has kept me company ever since and she is nice to come home to when I have been out shopping.

I carried on trying to do something else for others even when I felt low and it cheered me up. Gradually I have made some new human friends and one of my sons and his family are moving back to be near me. I never asked. He surprised me one day by knocking on my door and said he had been to the estate agents looking at houses for sale.

I'm not completely sure what I am trying to say but we do get back what we give out. I could have been quite miserable after my husband died and sat in front of the television all day and get ready to die as well. Instead I have Whisky, my son and his wife will soon be nearby, I've made friends with neighbours and I try to go out every day. I miss my husband very much but I feel he is looking down on me with approval. He wouldn't want me to be unhappy.

Thank you for reading this.

I asked Dorothy's permission to publish this.

Other Posts:
The Unconditional Love Of The Unsung Hero
Circles Of Goodness Can Change The World
The Green Skinned Children Who Appeared In An English Village