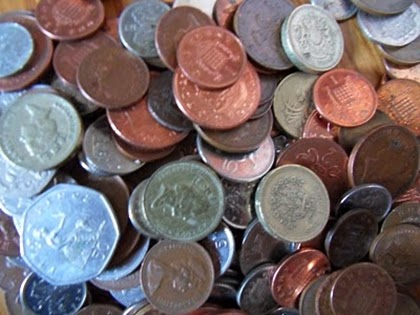 I have published several posts about how my wife is always finding coins when we go walking. Amanda Moss, who also finds coins, sent me this coin coincidence story. 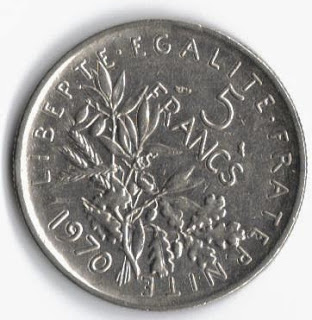 I read that your wife often finds coins when you go for walks in Cornwall. I thought, therefore, that you might be interested in this story as I often find coins as well.

I have a French friend, Claudine, and she was visiting me for a long weekend. I live in Harrow, north London. We were out walking and I was telling her about my coin finds. She's a very down to earth sort of woman and doesn't have any truck with anything paranormal or weird. I think she just indulged me telling her about finding coins. I don't think she even believed me.

We walked for a short while, we were in the local shopping centre, when I glanced down and said to Claudine, "See, here's a coin for you." I handed her the coin and she was stunned because it was a French coin from when France still had the Franc currency. It was a 5 Franc coin.

Then she looked at it further and started to laugh as she said, "It's from 1970, the year I was born."

We didn't find any further coins but it must have impressed her because that evening she was on Skype to her partner and mentioned the story of the find.

I have a jar of coins I have found.

I enclose a picture of the 5F coin.