Plymouth: From Where The Pilgrim Fathers Sailed And Sir Francis Drake Played Bowls 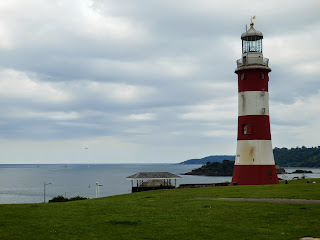 We strayed from Cornwall yesterday as we had to visit Plymouth in Devon. It wasn't a particularly nice day weather-wise but I took a few photos for the blog because Plymouth is known as the place from which the Mayflower headed for North America in 1620 and is also where Sir Francis Drake supposedly played bowls before defeating the Spanish Armada in 1588.

The first landmark on the waterfront is on Plymouth Hoe and is Smeaton's Tower (photos above and below), which was built in 1759 as a lighthouse on rocks 14 miles (23 km) off shore - but was dismantled and rebuilt on the Hoe in 1877. It was here, on the Hoe, where Francis Drake played his bowls. Wikipedia describes this:

"The most famous (but probably apocryphal) anecdote about Drake relates that, prior to the battle, he was playing a game of bowls on Plymouth Hoe. On being warned of the approach of the Spanish fleet, Drake is said to have remarked that there was plenty of time to finish the game and still beat the Spaniards." 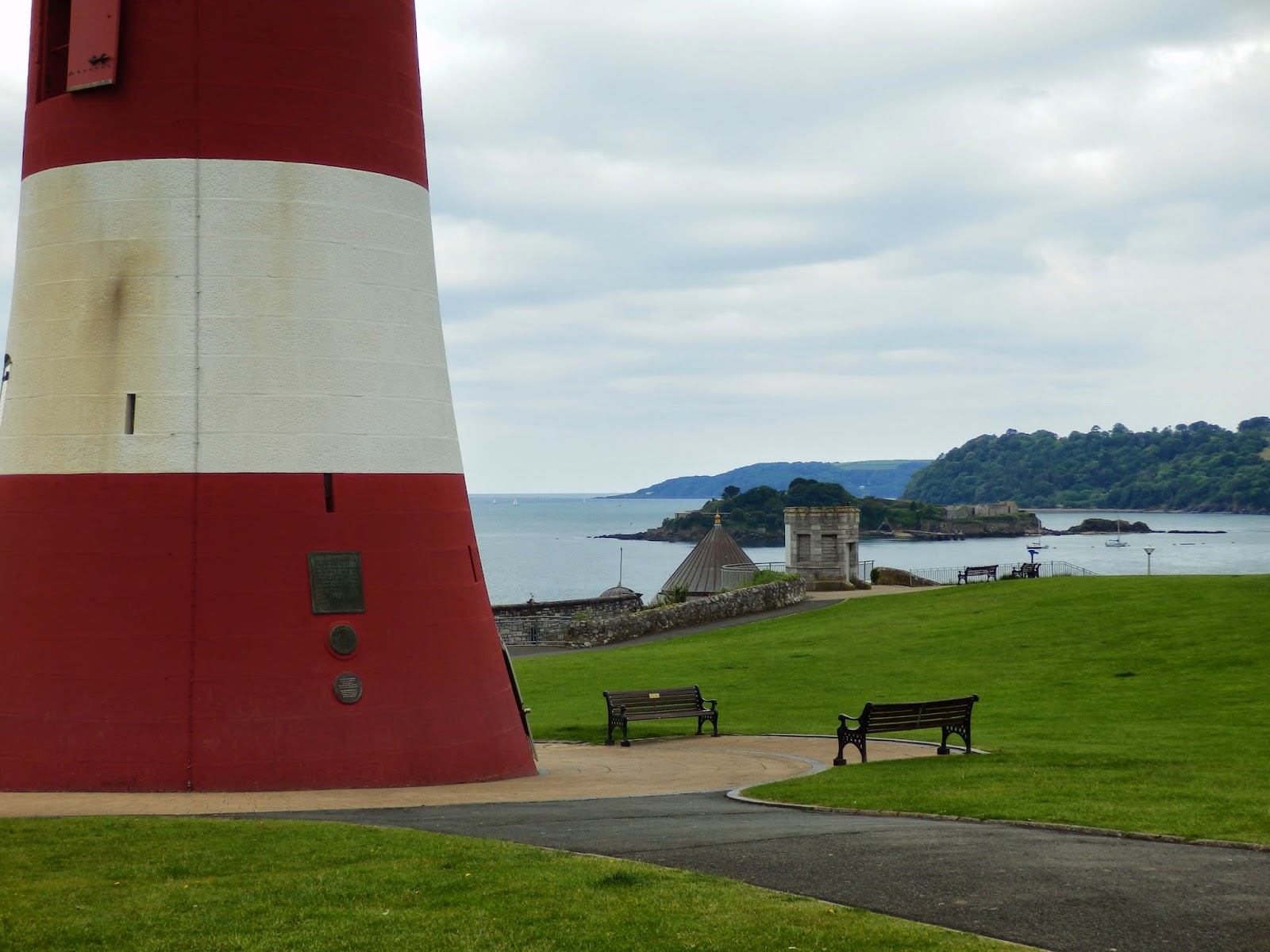 Walking along the waterfront you eventually reach the Barbican and it is from here that the Mayflower made it's way to North America in 1620. The building below commemorates this, along with the USA flag, and is known as the Mayflower Steps. 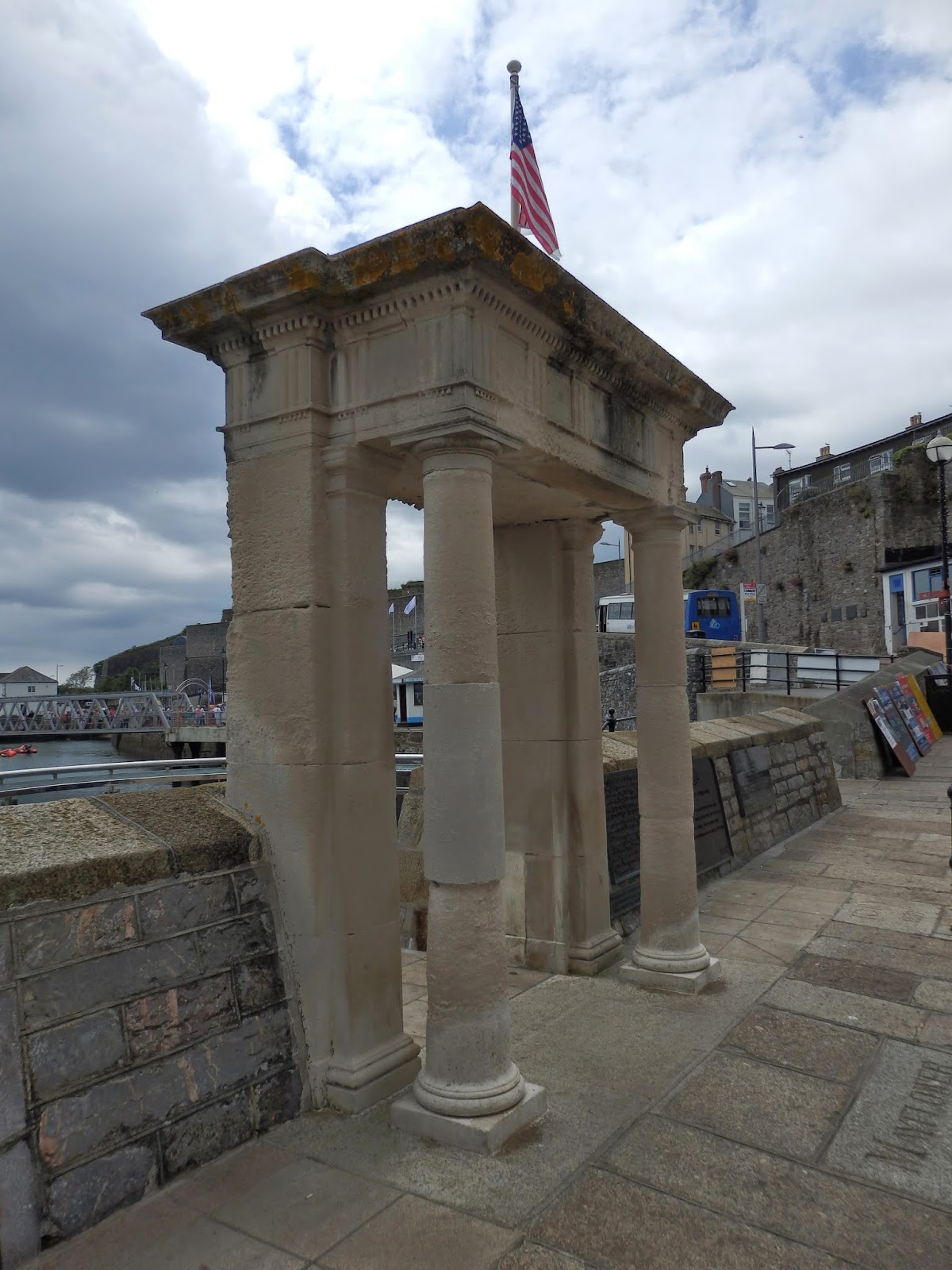 The date of the event is etched into the stones by the Mayflower Steps (photo below). There is a plaque on the sea wall which reads:

"On the 6th of September 1620, the Mayorality of Thomas Townes after being kindly entertained and courteously used by divers Friends there dwelling, the Pilgrim Fathers sailed from Plymouth in the Mayflower in the Providence of God to settle in New Plymouth and to lay the foundations of the New England States The ancient Cawsey whence they embarked was destroyed not many Years afterwards but the Site of their Embarkation is marked by the Stone bearing the name of the MAYFLOWER in the pavement of the adjacent Pier." 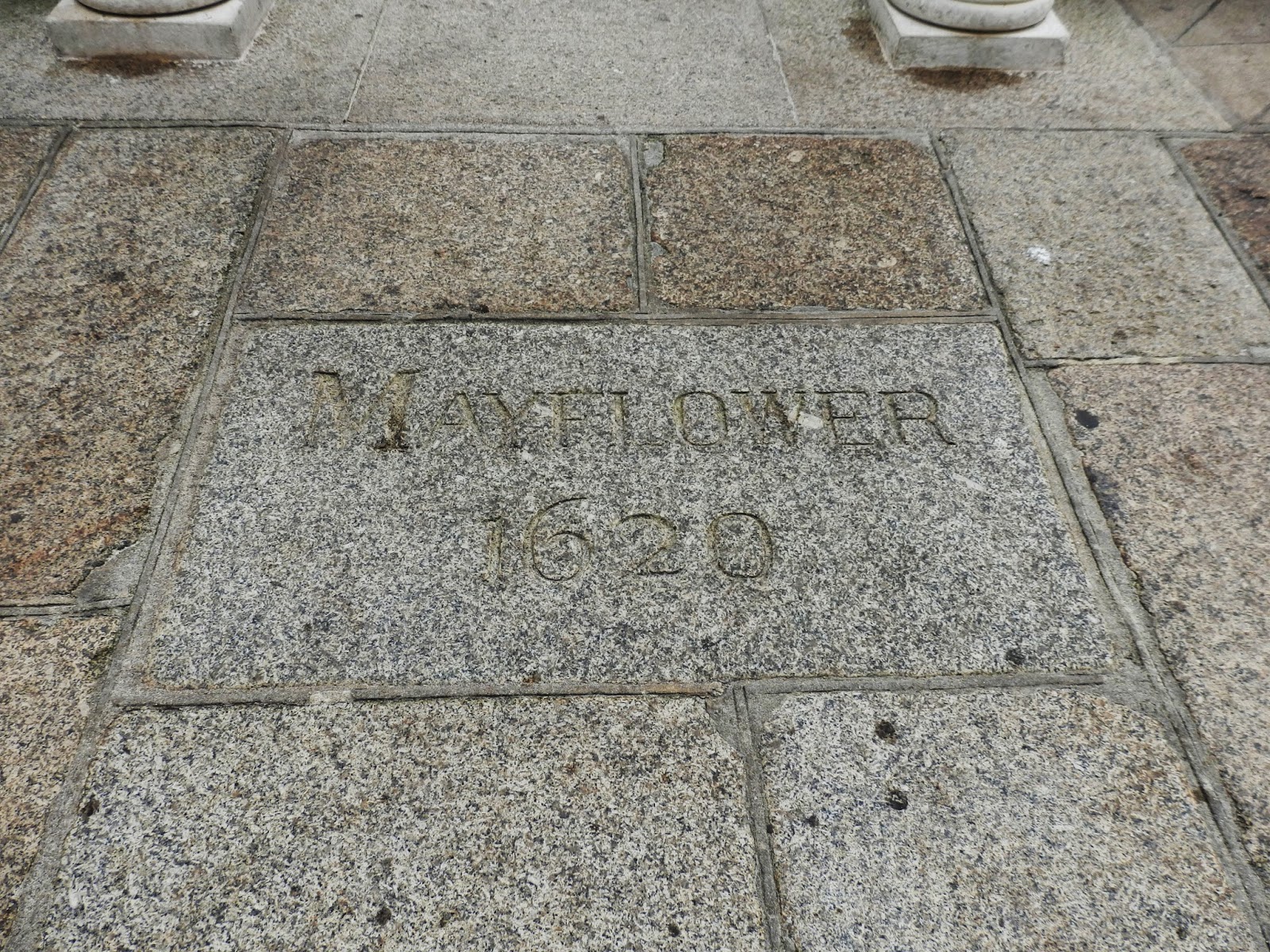 The sea wall has numerous plaques. The one below, for example, states: 'City of Plymouth. This tablet commemorates the departure from Plymouth in May 1839 of the Tory, the pioneer ship in the colonisation of New Zealand.' 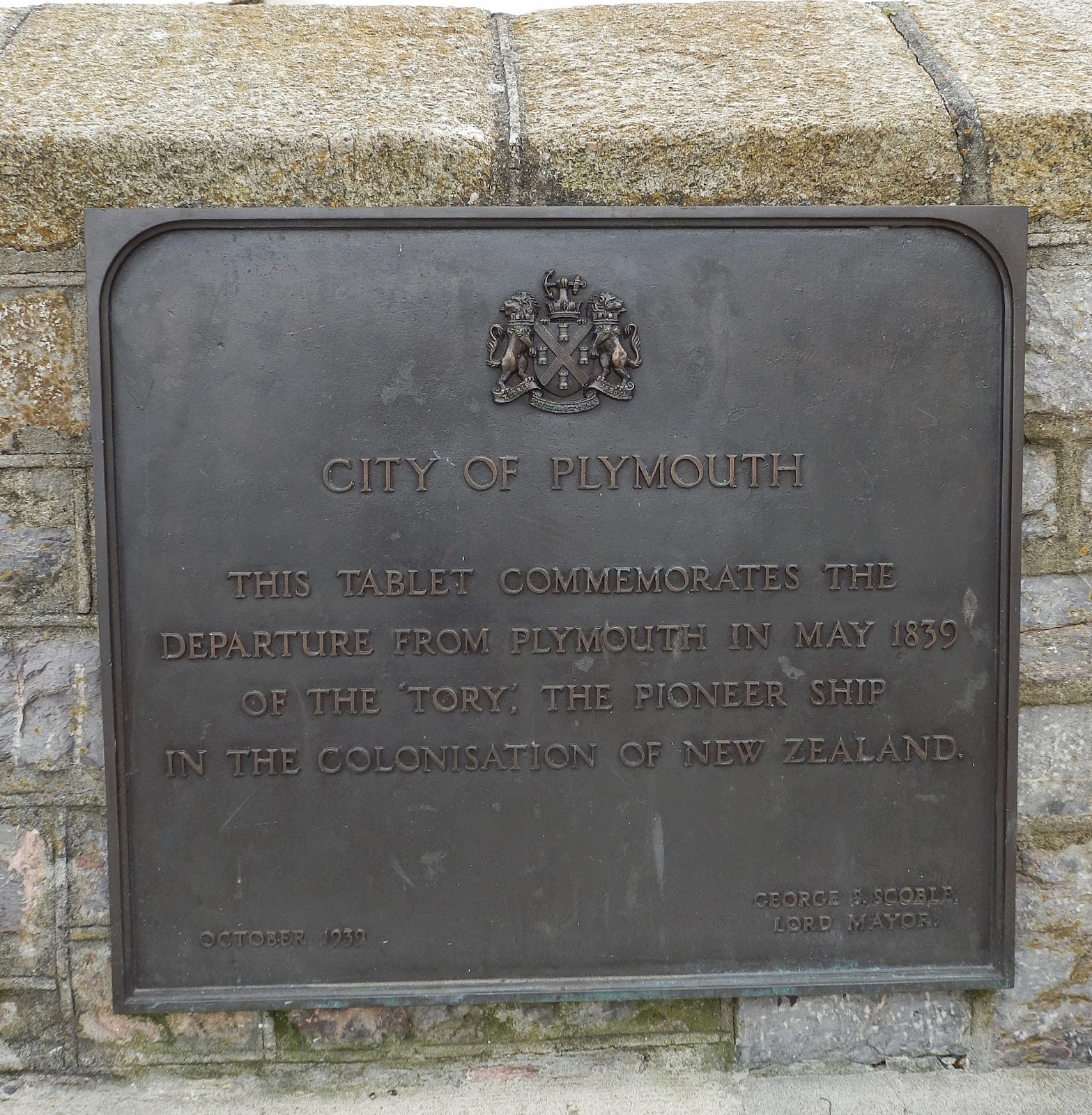 Another plaque also tells of Walter Raleigh's involvement with Virginia in the late 1500s. It reads:

'The Roanoke Colonies. From Plymouth on 7th April 1584 Walter Raleigh sent Philip Amadas and Arthur Barlow to North America to explore & prepare for English colonisation. On 13th July they claimed land in the name of Queen Elizabeth called Virginia in her honour.'

There  are many historical naval connections with Plymouth where the tourists visit. But away from this area, like with many big cities - a population of 250,000 people, making it the 27th most populous built-up area in England and Wales - there are also problems. From the car park we used I took this photo of a man being handcuffed and searched by police. 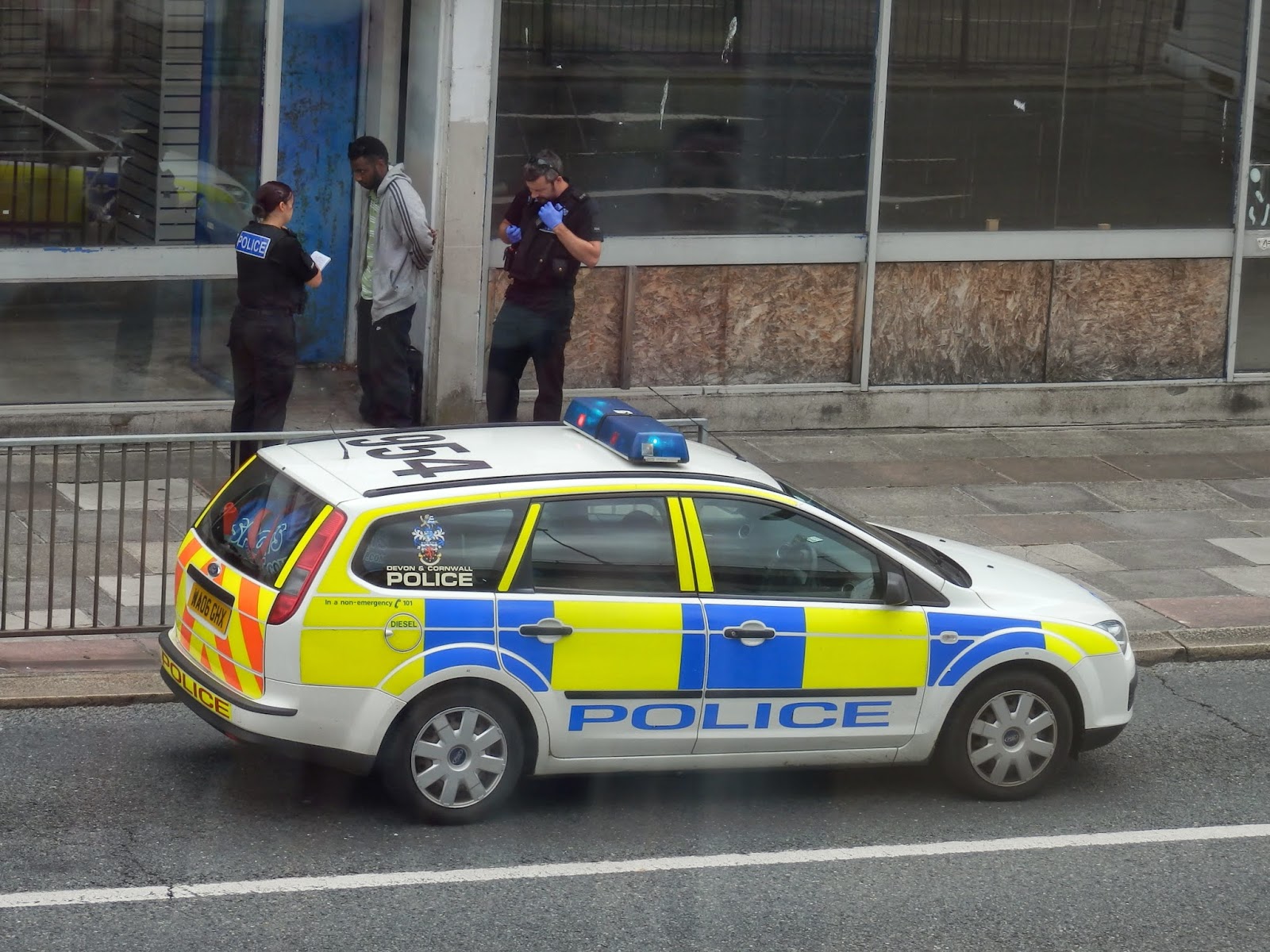 According to Wikipedia: "Plymouth Council is currently undertaking a project of urban redevelopment called the 'Vision for Plymouth' launched by the architect David Mackay and backed by both Plymouth City Council and the Plymouth Chamber of Commerce (PCC). Its projects range from shopping centres, a cruise terminal, a boulevard and to increase the population to 300,000 and build 33,000 dwellings."

In contrast to the previous photo, one of the Barbican's old streets: 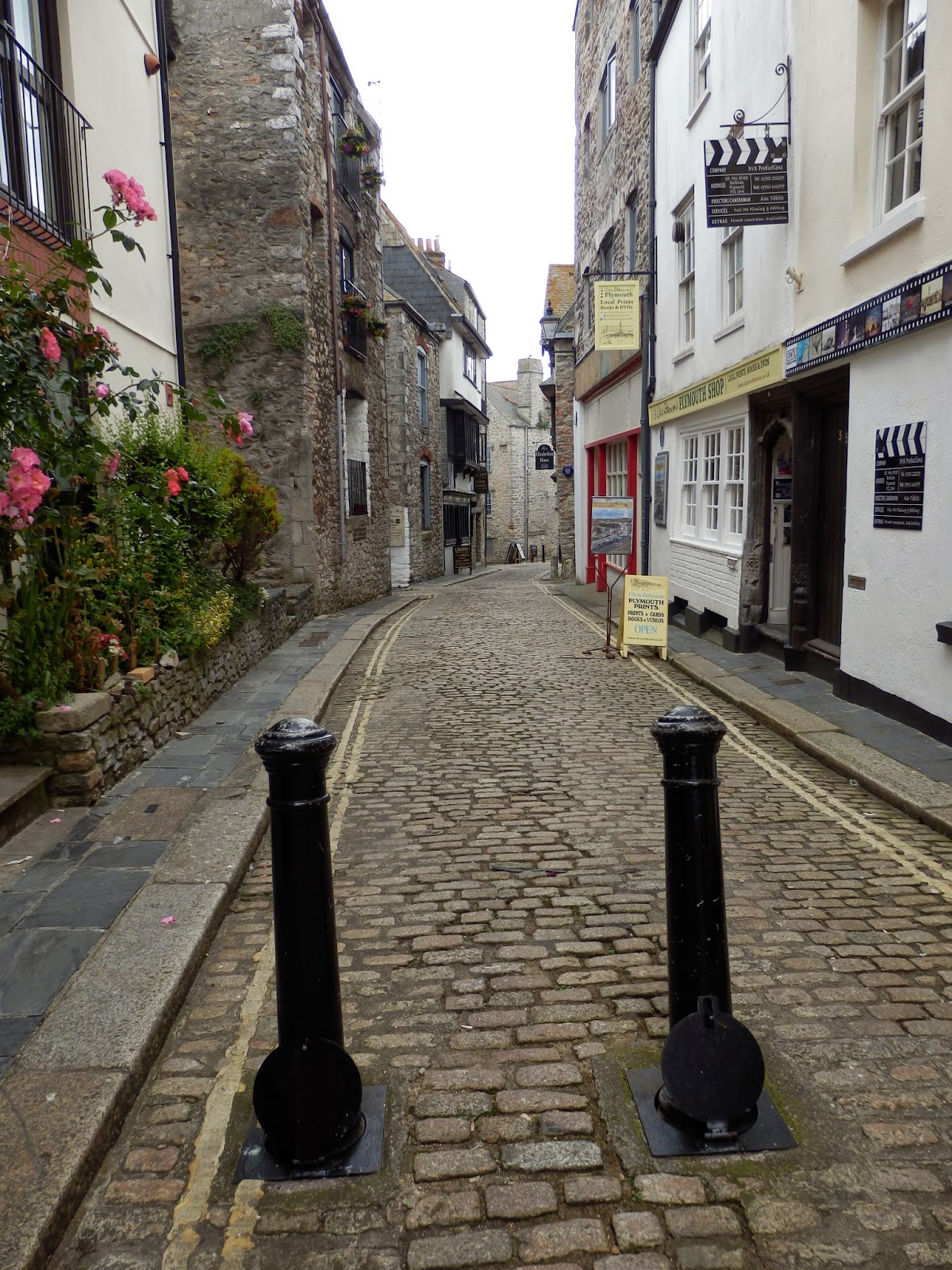 Other Recent Posts:
A Random Bus Journey To Marsaxlokk, Malta
The Power Of Magnetic Hematite Stones
In A Past Life She Saw Her Brother's Head Cut Off