The Mystery Of The Mouse Triangle 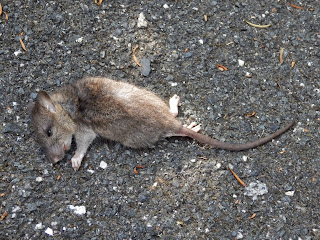 We had a recent trip away but, before we went, a Mouse Triangle began to take form.

Two days before going we found a dead mouse on our driveway. I moved the mouse in a respectful way.

The following day there was a further dead mouse on our driveway, about three feet from where the other was found. Again I moved him or her to a better place - or maybe he or she was already there. But, whatever, the next day we went on our trip, with no dead bodies in sight and a good time was had by all.

We arrived back late on the Monday and on Tuesday morning Karin said, "You'll never guess what, there's another dead mouse on our driveway."

And, of course, she was right. If the three dead mice were all in their original positions, and you were to join them with straight lines, it would make a triangle - thus the Mouse Triangle I mentioned in the first sentence of this post.

Mysterious. We haven't a cat, or any other rodent hating animal, so how did the mice end up in our driveway? Synchronicity perhaps? But synchronicity means 'a meaningful coincidence' and, as yet I can't pin a meaningful label to the three mice.

Obviously there's the nursery rhyme of Three Blind Mice, which my grandson used to like us to sing together. But he's now 4 years and 1 month, so has moved on to other songs, such as something from the Frozen movie.

I Googled 'dead mouse as a symbol' and the first entry I clicked on was Yahoo! Answers. The entry read: "Her co-workers went on to name it Mike the mouse before burying it. Mike is actually her brothers name and she got a weird feeling about the whole situation." 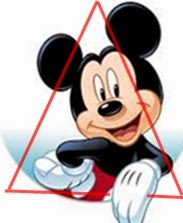 I next clicked on What's Your Sign and the writer said about dead animals: "An animal death reminds me of a Latin phrase I hold dear: Omnia mutantur omni tempus (all things are changing - a time for everything)."

On that note I decided to stop searching, but was persuaded to click on one more entry for the Spirit Animal Totems website which read:

But it wasn't all a dream, so the mystery of the Mouse Triangle remains.

Other Recent Posts:
The Ghostly Woman In A 19th Century White Dress
How Free Thinking Are We About Religion, God And Lap-Dancers
The Cornish Market House And Exposing Your Bull For Sale For Two Pence