Her Dead Mother Helped Her Give Birth 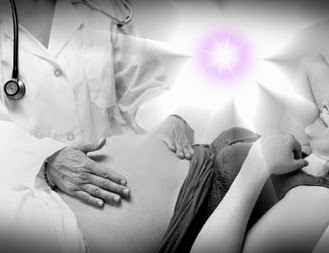 Clover Stroud was pregnant. Nothing strange there, especially as she already had three children: Jimmy, 13, Dolly ten and Evangeline 22 months,

Clover's mother, following a nasty accident many years ago, had become profoundly mentally and physically disabled and incapable of looking after herself. Sadly, when Clover was five months pregnant, her mother died.

She writes, "I was distraught, but took comfort in seeing the strength of love she had given me as a child living in my own three children, and tried my best to focus on the fourth little person who would soon be joining us."

After 38 weeks Clover went into labour. As her contractions peaked she suddenly felt very alone. This was despite her husband and the midwife being at her side.

She writes: "I wanted to escape, and somehow leave the labour room to retreat back into my safe life, before childbirth. But then, at the moment I felt most hopeless, I became quietly aware of a third person in the room with us."

Looking at this new visitor she noted that the woman was wearing a long denim skirt and there was something familiar about the knitted waistcoat. She realised this was her mother, her dead mother. Her appearance was as Clover remembered her from her teenage years, and before her accident.

Her mother smiled at her and she heard her say, "Come towards me. Come here. Come over and meet me." This was a voice she hadn't heard for 22 years.

Another contraction and again her mother said, "I'm here, just come towards me."

Clover's husband and the midwife were not aware of this other presence in the room.

Clover explained, "I did not think for one minute that I was hallucinating ... as I moved further into my labour I could see her clearly, standing beside me at each step. When I felt scared, I looked at her, and she smiled a little brighter so that my fear subsided."

She continued: "With her beside me, the pain stopped being a terrifying force ... Mum left the room as seamlessly and as quietly as she had arrived. When the moment came to push, she had simply gone. She had come to guide me to that point."

Her son, Dash, was born.

As a finale Clover said, "I know meeting my mother after death might seem improbable, but trying to understand, or account for, the powerful, mysterious force of the human spirit feels futile - beyond scientific reckoning."

Other Recent Posts:
The Coincidence Of The Alien Sighting Which Panicked A Nation
The Groping Ghost Gropes A Granny
1914 Adverts At The Start Of World War I

Email ThisBlogThis!Share to TwitterShare to FacebookShare to Pinterest
Labels: Birth, Life After Death