The Psychic Surgeon Who Channels St.Paul 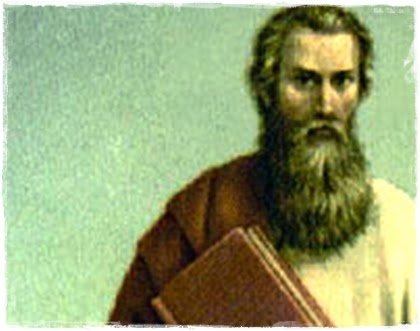 I think the first time I heard about psychic surgeons was with the case of Arigo or, to give him his real name, Jose Pedro de Freitas from Brazil. I published a post about him 2010.

Arigo 'operated' using only a pair of nail scissors and rusty penknife. While doing so he remained in a trance like state. He never used antiseptics or anaesthetics. It is said that, when he was once shown a film of himself operating, he fainted.

Okay, Arigo is a figure from the past - he was at his height in the late 1950s - but there are still psychic surgeons today. I was reading about a current healer, Ray Brown, in a Daily Mail article. 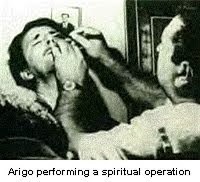 Arigo claimed that he channelled a German physicist called Dr Fritz, who guided his surgery. Ray Brown, however, seems to have more influence as he says his spirit guide is none other than St.Paul.

But lets not write this off as fake because their surgery does seem to work for some people. Take the case of Cynthia Knapp for example.

Cynthia, from Worthing, England reckons 'a miracle' happened following treatment by Ray Brown / St.Paul. She had been virtually immobilised by rheumatoid arthritis. Her pain was so great that sometimes she had difficulty in hobbling the short distance from her bedroom to the bathroom. Today her pain has gone and she is now able to go to the park with her grandchildren.

Cynthia told the Daily Mail, "I'd never been interested in anything New Age previously - I'm a born sceptic. But by that stage, I was willing to try anything. I'd had years of anti-rheumatic drugs on the NHS [National Health Service]. The pain in my back was excruciating. I had nothing to lose."

When she saw Brown he was already in a trance, so she explained her disease and discomfort. He then laid his hands on her neck and back, through her clothes. Cynthia then described what happened next:

"He told me a lot of my pain was caused by trapped nerves. He massaged and manipulated the particularly painful areas to release them which, I must admit, hurt a lot. After the first session, I felt sore for a couple of days, but then the pain in my neck and back disappeared. It was absolutely wonderful. Now, I go every month for a top-up session to keep me mobile and energetic."

I'd better add here that Ray Brown charges for his services.

Many will say what is happening in cases like this is purely the placebo effect. Dr Mike Eslea of the University of Central Lancashire comments:


"It's relative easy to manipulate people's perceptions of the levels of pain they're experiencing. When they believe a treatment will lessen their pain, it often does - it's the placebo effect, which can be positive if it encourages people to relax and give their bodies a chance to heal.

But when there's an objectively measurably problem, such as a tumour. they won't shrink it. They can only work with our mood."

But another person, Pat Phoenix, would probably disagree with this. She went to see another psychic surgeon, Vincent Fuller. She claims her symptoms of fibromyalgia, where she had chronic pain all over her body, disappeared. This is her story:


"I was absolutely desperate. The pain in my joints was indescribable. My doctor couldn't do anything beyond giving me strong painkillers. When a friend told me about psychic surgery, I found Vincent online and asked him if he'd come to Wales [where she lives in Wrexham].

I couldn't see Vincent because I was lying on my front, but his voice changed and took on a Spanish accent. He put his hands on my head, spine and legs.

He only touched me gently, but it felt as if something shifted inside - like when you are pregnant and can feel the baby moving in your womb. It felt peculiar, but not painful.

At first, I felt awful. My limbs ached and my joints hurt. But, three days later, I felt amazing. My pain disappeared and hasn't returned since. I've done more walking in the past month than in the past three years."

Going back to the first example Cynthia says about the sceptics: "I don't care what people think - as far as I'm concerned, it's magic. I may not know how it works, but I'm living proof that it can."

I'm not recommending psychic surgery, as I have no personal experience, but we mustn't just write something off because it sounds different. It may simply be a placebo effect, but does this really matter if it makes the pain ease?

There are more testimonials on Paul Brown's website here.

It's up to the individual to form his or her own opinion regarding psychic surgeons and other alternative treatments.

Other Posts:
The Psychic Surgeon Arigo
The Ten Secrets To Living A Long Healthy Life
The Size Of Your Telomeres Really Does Matter If You Want A Longer LIfe