The Telegram That Told Of A Death 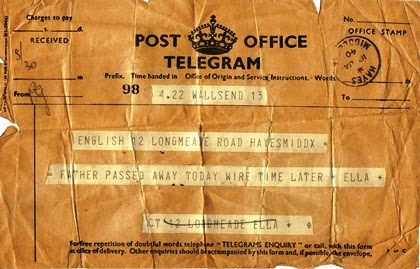 A couple of days ago I published a post about our modern use of computers and phones. This reminded me of the contrast with a telegram I have from 1940, which I found following my mother's death.

In 1940 my mother was single and had moved to west London while her father, mother and three siblings remained in Wallsend, which is in north-east England, some 300 miles away.

Her father (my grandfather) died completely unexpectedly. He was simply getting out of bed one morning in 1940 and passed away - no reason known. The only way my mother could be informed of this was by telegram. The message from her sister briefly stated : 'Father passed away today. Wire time later Ella'.

It must have been quite a shock, but brevity was essential with telegrams as each word was expensive, plus this happened during the second world war, when money was tight.

My grandfather's death in 1940 meant I never knew him, though I've always felt a closeness to him for some reason. I've told the story previously about my link with him through the the two Buddha I have on my mantelpiece.

When in her nineties my mother had a severe stroke and had to be looked after in a Nursing Home. It was a sad and difficult time. Just before she died we managed to get her to our house. It was very emotional as she 'knew' this would be the last time she would see my home.

As we sat in our living room she looked at my Buddhas on the mantelpiece, where they had sat for many years, including all the while my mother was fit and healthy. "It's strange," she said, "My father always had a Buddha on the fireplace mantelpiece as well." I'd never known this. It seems, like me, he was interested in Buddhism.

I've strayed from the subject of telegrams and communication but isn't it amazing how we have gone from words stuck on a piece of paper, and used for emergencies, to today's technology where we can contact and see someone instantly. Wonder what another 75 years will bring?

Other Random Posts:
Remembering Our Life Prior To Us Being Born
Amazing Coincidences Discovered Through A Television Show
JK Rowling And Harry Potter Birthday Coincidence