The Coincidence Of The Teeth Found In A Cod's Stomach 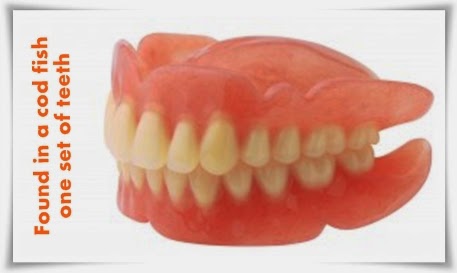 Cor Stoop was on a North Sea fishing trip. The rough sea didn't agree with him and he began to feel quite queasy. The inevitable happened, and he was seasick while leaning over the side of the boat.

It's happened to lots of people, but Stoop also lost his dentures while losing the contents of his stomach..

This seemed to be the end of the story until Hugo Slamat, who runs a fishing tackle shop, also went on a fishing trip in the North Sea. Some of the anglers has been successful with their catches and Slamat was gutting some of the catch, one of them a 19 pound cod. He explained, "I saw this thing in the cod's stomach and turned it over with the tip of my knife and then I saw the teeth!"

Slamat showed his find to the skipper of the Hendrik Karssen fishing boat. "He told me he had someone on board who lost his teeth in the summer. It's an unbelievable coincidence."

The skipper knew how to get in touch with Cor Stoop so Slamat was able to return the teeth.

Stoop said that he didn't mind where his teeth had been, he was just glad to get them back. As he said, "A cod's stomach is very clean."

Adapted from a story in the The Free Lance Star.

Other Recent Coincidence Stories:
The Cornish Bakers Weird Coincidence
Saved By Coincidences While At War: An Unknown Story
The Remarkable Coincidence Of The German Emperor Who Tried To Eat The World