The Red Thread Of Destiny Tightens 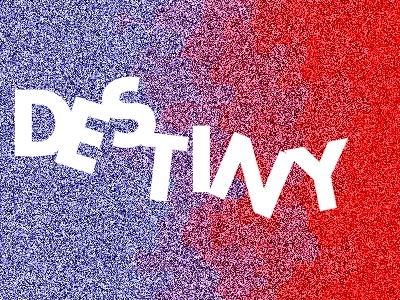 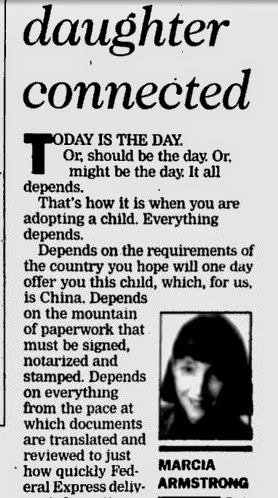 It's as if we are meant to see certain things. On Saturday I published a post, The Red Thread Of Destiny Which Connects Us For Eternity.

It was about how author, Ann Hood, was adopting a child from China and was quite shocked to learn that the baby found for her was born on the same day as her daughter, Grace, who had died three years earlier.

I mentioned in the post  about how there is a Chinese belief that we are linked to our children (and others) by a red thread.

I was doing some research on something completely removed from China, adoption and the red threads of destiny, when I came across a newspaper, The Free Lance Star, which was dated December 21, 2004.

It was as if it was shoved in front of my face: there was an article by Marcia Armstrong, about, yes, China, adoption and red threads.

Marcia, who was in the process of adopting, went on to write: 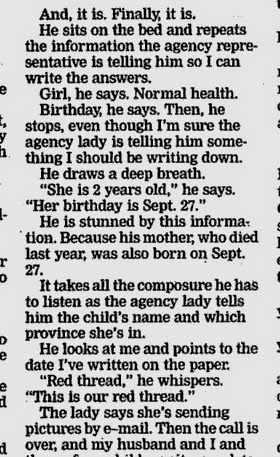 He sits on the bed and repeats the information the agency representative is telling him so I can write the answers.

"Birthday," he says. Then he stops, even though I'm sure the agency lady is telling him something I should be writing down.

He draws a deep breath.

He is stunned by this information. Because his mother, who died last year, was also born on September 27.

It takes him all the composure he has to listen as the agency lady tells him the child's name and which province she is in.

He looks at me and points to the date I've written on the paper.

"Red thread," he whispers, "This is our red thread."

The lady says she's sending him pictures by e-mail. Then the call is over, and my husband and I ..."

The same day as I saw Marcia Armstrong's article someone left a comment on one of my posts, which appears to be an example of the red thread shortening and bringing two people together:


"I wouldn't call this a love story as yet but I've had what I consider to be against the odds meetings with a woman in my building.

We met in my building elevator two weeks ago and had a conversation for the first time. I realised I'd last seen her two years ago and, at that time, assumed she was just visiting. As it turns out, she's been living only several doors away from me.

That was on the Monday and by Friday, I came across her in a company I've visited regularly for several years. She also works there but I never knew.

Our working hours are substantially different so the chances of meeting are quite rare; hence not having seen her for two years. However, in the last two weeks, we've had chance meetings every few days.

This morning, for example, she popped into my head in terms of  'I wonder what time she actually does leave for work' and there she was as I turned around. I told the story to a friend and this prompted him to joke that it was if I was stalking her!"

Sometimes it does seem that we are drawn to people by synchronicity - when the time is right, The red thread shortens until there is no escape from our destiny.

Other Random Recent Posts:
How Free Thinking Are We About Religion, God And Lap-Dancers
Her Dead Mother Helped Her Give Birth
The Celtic Cosmos Of Infusing Worlds