The Red Thread Of Destiny Which Connects Us For Eternity 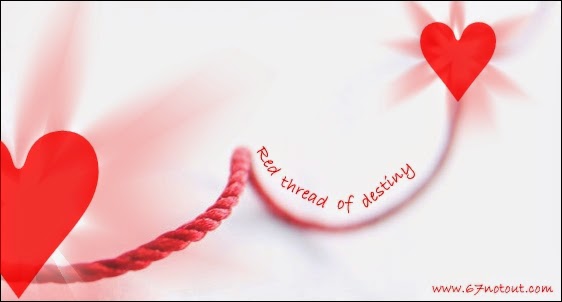 I was reading an article in a newspaper which mentioned how in China there is a belief that an invisible red thread connects the important people in our lives.

There are various variations on this theme: the red thread links us to the person we should marry or links us to the child destined to be ours, either naturally or through adoption.

With the second of these variations there is an interesting story about the writer, Ann Hood, whose daughter, Grace, tragically died at the age of five.

Ann went through the agonies of losing a child, but three years later the idea developed within her that she should adopt a baby from China. The procedures for doing so were followed and eventually she received notification that a child had been found for her and her husband.

The social worker handling the adoption gave Ann the details, "She's healthy and she's nine months old, born on the 18th of April."

This was a shock, as the 18th of April was the day that Grace had died.

Fate, destiny, synchronicity, coincidence, call it what you will, but since then Ann has found similar examples over and over. Her niece's baby boy was born on her grandfathers birthday. She found that her friend had chosen the 6th of September as her wedding day, without realising that this was also the day her grandparents had married. Even in the group of ten families who travelled with her to China, three of the adopted babies had the same birthdays as those of deceased members of their new families.

There are many legends of the red thread of destiny or fate. The following is from Wikipedia:


"One story featuring the red string of fate involves a young boy. Walking home one night, a young boy sees an old man (Yue Xia Lao) standing beneath the moonlight. The man explains to the boy that he is attached to his destined wife by a red thread. Yue Xia Lao shows the boy the young girl who is destined to be his wife. Being young and having no interest in having a wife, the young boy picks up a rock and throws it at the girl, running away.

Many years later, when the boy has grown into a young man, his parents arrange a wedding for him. On the night of his wedding, his wife waits for him in their bedroom, with the traditional veil covering her face. Raising it, the man is delighted to find that his wife is one of the great beauties of his village. However, she wears an adornment on her eyebrow. He asks her why she wears it and she responds that when she was a young girl, a boy threw a rock at her that struck her, leaving a scar on her eyebrow. She self-consciously wears the adornment to cover it up.

The woman is, in fact, the same young girl connected to the man by the red thread shown to him by Yue Xia Lao back in his childhood, showing that they were connected by the red string of fate."

It's not only soul mates or children who are connected in this way. It is often said in China that when a baby is born, he or she is already connected to the important people in his or her life. As each birthday passes the threads shorten and tighten, bringing together those who are fated to be together.

Others say that the red thread connects not just people from the present, but also those from the past and the future. The thread may tangle or knot but it never breaks.

Perhaps we are connected to some people for eternity.

Other Recent Posts:
Sammy Rescues Lucy From The Dinosaurs At Eden
He Felt Dirty After Being With The Aliens
The Telegram That Told Of A Death