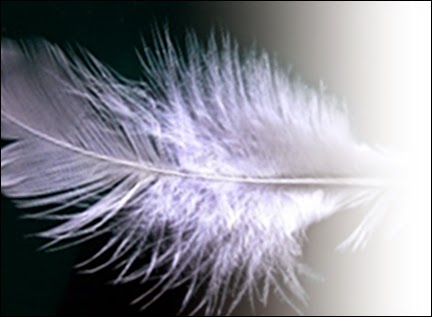 Another white feather story to add to the collection. This one is from Katharine Farrell.


"My mother died in July almost unexpectedly, so it was a big shock for me and my sister. We were all very close since our father passed away.

At the funeral we found a white feather at the graveside, right where me and my sister stood. It was my husband who saw it. He pointed it out to us because it was large and fluffy and for no other reason.

When the funeral was over some of us made our way to my sister's house. She got there before us and the first thing she said when she opened the door was, "There was another white feather on the doorstep when I got home."

Since then both me and my sister kept seeing white feathers for five or six weeks and then they got less and less until September 2, which would have been mother's birthday. My sister and her partner came to my house and when I opened the door to them there was a white feather by the front door.

Me and my sister kept thinking the feathers were somehow from mother but my husband thought that was silly. But now I've seen all of those other white feather stories I'm convinced the feathers we saw were from our mother. I find it comforting to think this, as I miss her very much and I know my sister does as well."