Deceased Grandfather Sent A Message That Grandmother Would Would Die Soon 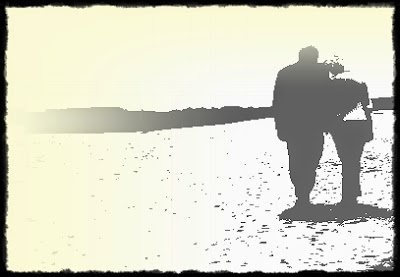 Here's a story from Ruby FitzGerald of an experience that she says 'had a very profound effect' on her. Some will say it's all about a dream, but it's more than that. People who have experienced such things are in no doubt that these are not simply remembered dreams, they are a completely different category.


"When I was 20 I was living at home with my mum, Elizabeth. My grandmother, who'd been staying with us since by grandfather had passed away seven years previously, had recently moved to a care home.

One night I dreamed of my grandmother and grandfather. I was standing on a beach in Worthing, West Sussex, where we used to live, and there, emerging from the right of my view was my grandfather, wearing the kind of green V-necked tank top and smart shirt he always wore.

I was so pleased to see him - although he looked quite serious - and then my grandmother emerged from the right and linked arms with him. I said to her: "Grandma look! It's Grandpa! How incredible is this?"

My grandfather looked at me and said that in the morning I must tell my mother that Grandma was going to die soon, and that she must prepare herself for it.

Then they both turned away, arm-in-arm, and walked several paces up the pebble beach together.

I started to follow them so that I could talk some more to my grandfather, but he turned around and told me to stop and go back and tell my mother what he'd asked me to do,

When I woke up, although I didn't want to upset Mum, I new I had to deliver the message. I told her I'd seen Grandpa and that he'd told me Grandma was going to die soon and that Mum needed to be ready.

Of course, Mum didn't make much of it. She thought it was just a dream - but I knew I'd experienced something different.

Three weeks later we got a phone call saying Grandma had passed away from complications that no one had known about.

I was upset but felt comforted by my conviction that Grandpa had warned me. I've always been quite spiritual, but now I don't even question that when I die it won't be the end of my journey."

Other Recent Posts:
The Weird Case Of The Volcano Which Popped Up From A Corn Field
Issie The Monster In Lake Ikeda Japan The Mysterious Dogon People And The Knowledge They Learned From The Fish-Like Aliens

Email ThisBlogThis!Share to TwitterShare to FacebookShare to Pinterest
Labels: Dreams, Life After Death, Messages from the dead