The Spunkie Doomed To Walk The Earth Until Judgement Day 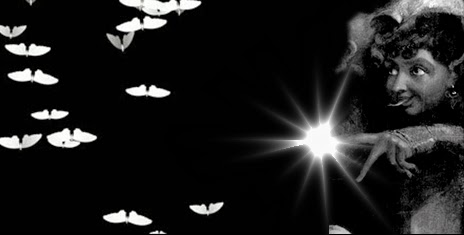 I happened upon the spunkie recently.

Legends from England's West Country say that spirit-like spunkies can take the shape of white moths, which flutter here and there often without being noticed.

The spunkie-haunted bog, Where sank the shepherd and his dog ~ 1898But what is a spunkie?

From what I can make out they are sad and lonely ghosts, some say the spririts of unbaptised children. They wander the land seeking someone to give them a name.Sadly they are doomed to do this until Judgement Day.

If you look carefully, however, you might just spot one at Halloween, in churches and at religious gatherings, where they are able to meet up with the spirits of those who have died recently.

But sometimes spunkies are problematic as per this example from the Superstitions of the Highlands (Scotland):


"Suddenly the traveller's attention was arrested by the most resplendent light, apparently reflected from a window nor far distant; which, however, as the traveller approached, receded from him like the rainbow.

Still pursuing his course toward it, the wily spunkie manoeuvred so dexterously, that the unhappy wanderer was speedily decoyed into the nearest moss or precipice. Plunging headlong into some fatal abyss, the deluded victim never returned to his mourning wife and family, to relate to them the spunkie's perfidy."

So another creature to worry about ... along with the likes of The Shadow People, Black Stick Men and Mothmen. Or perhaps they are figments of out imagination ... but there again ...