Half Human, Half Beast With Great Bat-Like Wings

I was flitting through the satellite channels on my television last night and came across a programme that was describing a monster seen in Van Meter, Iowa in the early 1900s. I'd missed most of the details so I did a bit of research this morning. I found a report in The Evening News of October 12, 1903 titled Half Human, Half Beast, With Great Bat-Like Wings.

Here's the report - I always like the way they worded newspapers back then. 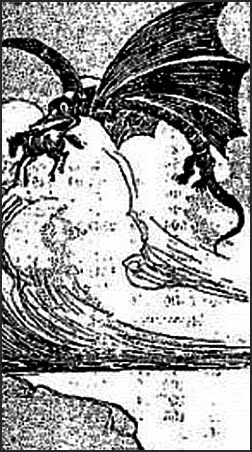 The town of Van Meter, containing 1,000 persons is terribly wrought up by what is described as a horrible monster. Every man, woman and child in the town is in a state of terror, and fully half of them fail to close their eyes in slumber except in broad daylight.

Friday night while the population was keeping the dreadful vigil every electric light in the city was kept burning to satisfy the most timid.

The monster put in its appearance Monday night. U.S Griffith, an implement dealer, drove into town at 1 a.m and saw what seemed to be an electric searchlight on Maher & Grigg's store. While he gazed it sailed across to another building and then disappeared.

His story was no believed next day. But the following night Dr. A.C Olcott, who sleeps in his office on the principal street, was awakened by a bright light shining in his face.

He grabbed a shotgun and ran outside the building where he saw a monster, seemingly half human and half beast, with great bat-like wings. A dazzling light that fairly blinded him came from a blunt, horn-like protuberance in the middle of the animal's forehead and it gave off a stupifying odour that almost overcome him.

The doctor discharged his weapon and fled into his office, barring doors and windows, and remained there in abject terror until next morning.

Peter Dunn, cashier in the only bank in town, fearing bank robbers, loaded a repeating shotgun with shells filled with buckshot, and prepared to guard his funds next night. At 2p.m he was blinded by the presense of a light of great intensity.

Eventually he recovered his senses sufficiently to distinguish the monster and fired through the window. The plate glass and sash were torn out and the monster disappeared. Next morning imprints of great three-toes feet were discernible in the soft earth.

That night Dr. O.V White saw the monster climbing down a telephone pole, using a beak much in the manner of a parrot. As it struck the ground it seemed to travel in leaps, like a kngaroo, using it's huge featherless wings to assist. It gave off no light. He fired at it and he believed he wounded it. The shot was followed by an overpowering odour. Sidney Gregg attracted by the shot, saw the monster fly away.

But the climax came Friday night. The whole town was aroused by this time. Professor Martin, principal of the schools, decided that from the description it was an antedeluvian animal.

Shortly after midnight J.L Platt, foreman of the brick plant, heard a peculiar sound in an abandoned coal mine, and as the men had reported a similar sound before, a body of volunteers started an investigation. Presently the monster emerged from the shaft, accompanied by a smaller one. A score of shots were fired without effect.

The whole town was aroused and a vigil maintained the rest of the night, but withot result until just at dawn, when the two monsters returned and disappeared down the shaft.

A watch was kept again last night, but without result. The town geniuses are devising various plans to capture the monsters.

The coal mine is no longer in existence.

Other Recent Posts:
The Mocking Lake Or Pohenegamook Monster
Over 10 Feet Tall The Giant From Cardiff
The Spunkie Doomed To Walk The Earth Until Judgement Day