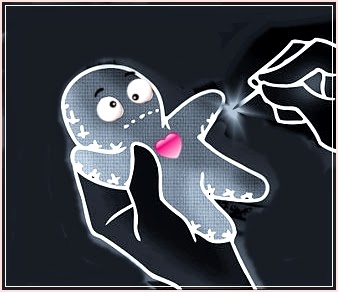 Sometimes it's difficult to quantify what is coincidence or synchronicity and what is perhaps some other 'power' that makes strange things happen. Here's a letter, not sent to me, but was in my cuttings file from a while back.


"Some years ago my husband was treated very badly by the man he worked for. We had been to his house and I new the room where he slept.

This night I was feeling a lot of anger and hate, and felt myself concentrating very hard on the side of the bed which I thought he would be sleeping on; I was sticking pins into his stomach slowly one by one.

I heard the next morning that his wife had been taken to hospital during the early hours of the morning in terrible pain. They thought it was gall-stones, but the test showed nothing wrong.

Did I do that, do you think? I know I felt drained the next morning because I had concentrated do much ..."

So is something like that a coincidence, or perhaps a form of ancient magic as carried out by the likes of witches and witchdoctors.

Of course, the letter writer could have sent love instead of hatred - and may well have got a much more positive result.

Other Recent Posts:
The Ghost Only Seen By Women And Children
What Is It? Coincidence Or Fate?
Top 10 Coincidence And Synchronicity Stories