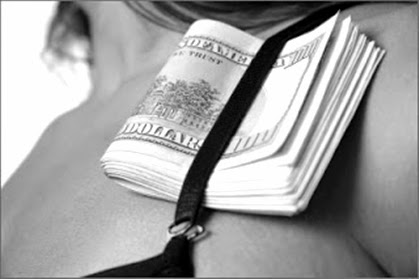 A little coincidence style story from the archives of  The Fort Scott Tribune.

Casa Grande, Ariz: A housewife has recovered a roll of $230 in bills after it travelled 13 days in a sewer.

Rose Mary Sotelo told city officials she was cleaning her toilet on July 3, and when she reached to flush it, the money dropped from her bra and was flushed down the drain.

Officials said she had one chance in five million of recovering the money. On Wednesday, however, Harvey Swearingen, a sewerage employee, happened to turn off the sewerage chopper at the disposal plant three miles from Mrs. Sotelo's home.

He was amazed to find neatly rolled $5 and $10 bills, totalling $230, with a rubber band still holding them intact.