The Shadow Men Stalking Our World 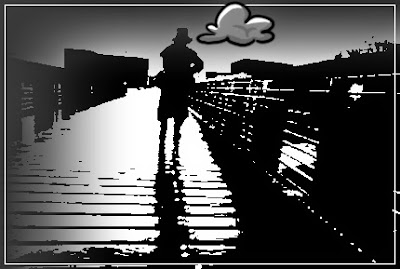 I first wrote about The Shadow People Who Stalk Our World back in 2013. At the time it got a very big response. I've also brought the subject up a couple of other times since then. Today we have someone's personal experiences of seeing Shadow Men. He wishes to remain anonymous, but here is his story.


"I used to see shadow people The first one I saw was when I was 14 years old back in 1999, before anyone started talking about them. I stopped seeing them in 2005 when I was almost 20.

The first sighting was when I was walking home from school. I lived in a small town of about 900 people and on the way to my house there was a wood bridge I had to cross. The shadow man was leaning against the right rail, slightly hunched over. He stood about 12 feet tall and was wearing a large top hat, that probably added another 2ft to the form.

I was on Main Street which meant this thing was about 70 yards away. It scared me so badly I walked about a mile out of my way to cross the car bridge. When I came past the wood bridge, on the other side, I didn't look toward it, but just ran home.

Also, the shadow men are not see-through, as some have stated, They are pure blackness.

I should also mention that at the time I was starting to fall into a deep depression and eventually attempted suicide, about a year later.

The second time I saw one it was in my bedroom at night. I could see it even though my room was pretty dark. They are darker than black, if that makes any sense.

It was on the wall past the foot of my bed and. when I noticed it, it moved along the ceiling and laid next to me in my bed. I wasn't that scared, oddly enough. I stuck my hand out and actually touched it. It was easily 10 degrees colder than my room, probably even more. I eventually went to sleep with it there.

The third time I saw one, and the last time, I was almost 20 years old and working at a foster home for a mentally challenged elderly woman.

It was at night and I was in bed trying to sleep. The house was in a larger city, so some outside lights were lighting up my room a bit. When I opened my eyes and looked at the ceiling above me, there was a black circle about the size of a basketball. It grew in size rapidly, maybe about human sized but maintained its round shape, then it dropped at me. It happened rather fast and I closed my eyes and flinched so hard I kind of jumped laying down.

Anyway, those were my personal experiences I've shared with only a few people. I believe they tend to show up to people who are deeply depressed or with emotional problems.

I have a cousin who was in the hospital after she tried killing herself after she had a stillborn. This happened about 3 years ago. She was telling me she was visited by the devil. I'm an atheist so I didn't believe that. I asked her to describe this 'devil' and she said it was a black figure in the shape of a man that stood next to her in her hospital bed."