They rolled him up in a sheet of lead,
A sheet of lead for a funeral pall,
They plunged him in the cauldron red.
and melted him lead bones and all.

Hermitage Castle, in the Scottish Borders, was built around 1240 by Sir Nicholas Soulis. His son William became known as Bad Lord Soulis and was familiar with the Black Arts. This led to tales of local children disappearing and never being seen again. It was rumoured that they were locked in his castle dungeon and used for his diabolical rituals.

There's always a straw though that breaks the camel's back. In this case it was in 1320 when the evil lord began to lust over a certain young woman with the surname of Armstrong. He was determined to have his evil way with her, with force if necessary, as he had done with many other women before. 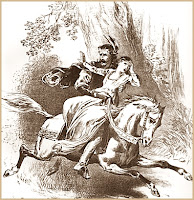 He was on his way to to satisfy his desires when he was confronted by Miss Armstrong's father, who had became aware of William's lust for his daughter. But nothing would quench Soulis' desire so he killed the young woman's father.

Many local people saw the killing and they rose up to take revenge, but the Laird of Mangerton arrived on the scene and called for calm. He escorted Soulis back to Hermitage Castle.

Lord Soulis' pride was hurt, by the way he had been saved by an inferior man such as the Laird. He decided to get even, so he invited the Laird to a banquet. Arriving at the castle the Laird was killed.

His grieving friends bore away his body to be buried at Ettleton Cemetery. The next morning he was laid to rest, and later, by the roadside, beneath the cemetery, a cross was erected, the Milnholm Cross, to mark the event and passing of a respected and much loved Laird.

The local people were seething at the loss the Laird and somehow this unrest reached the ears of the King who is said to have exclaimed, "Soulis! Soulis! Go boil him in brew!"

Soulis was overpowered and taken to Ninestane Rig, high up in the hills by a Druid circle. There, a huge cauldron and fire had been prepared and the Lord Soulis was wrapped in lead and placed in the cauldron where he was boiled to his death.

Of course, like a Chinese Whisper, as the years pass, stories seem to get embroidered and altered.

Other Recent Posts:
The Goddess Athena And Why Crows Are Black
The Heady Odour Of Flowers As A Message From A Deceased Loved One
White Feathers As Messages From The Deceased