The Goddess Athena And Why Crows Are Black 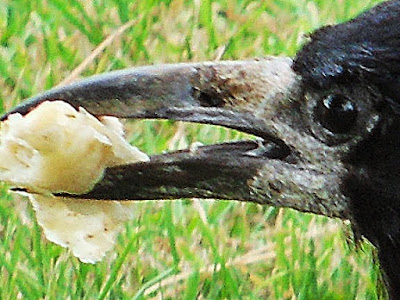 We were walking by the river in Truro, Cornwall when we came across lots of crows living in the tall trees by the water. That's one of the Truro crows above. I snapped a photo of him as he was having his lunch.

In Greek mythology there is a reason given as to why crows are black. According to the legend they were originally white. This is the story:

Unfortunately for him his act of passion wasn't completed and his seed fell to the ground. Athena kept her virtue but Mother Earth conceived Hephaistos' child.

When born the poor baby was very ugly with a serpent's tail instead of legs. He looked half boy and half snake. The child was given to King Kekrop's daughters to bring up, but they had instructions never to look at him - which must have made child care a little difficult.

King's daughters, being what they are, they decided to take a peek at the baby. The sight of the child drove them mad. So much so they felt compelled to hurl themselves off the summit of the Acropolis.

So, never make a goddess drop anything as you never know what the outcome might be.

Other Recent Posts:
The Heady Odour Of Flowers As A Message From A Deceased Loved One
Stepping Through A Time Slip And Into Her Previous Life
The Teenage Victorian Girl Ghost Called Gretchen