The Long Arm Of Coincidence From Bavaria To USA 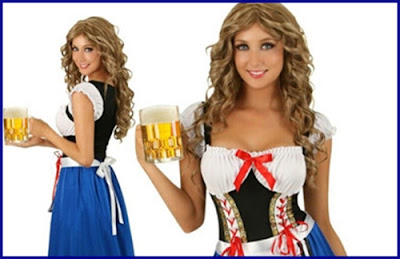 Here's a coincidence story I saw in a copy of the Daily Mail newspaper.


Back in 1976, I was working for Marconi on the Exosat satellite programme. The German Messerschmitt-Bolkow-Blohm (MBB) was the prime contractor.

I had to go to a meeting at MBB headquarters in Munich, and my golf partner and colleague at Marconi was working nearby.

I rang him and asked whether there was anything I could bring him, and he replied, "I'd love a bottle of Scotch." I asked him how I would get it too him, and he said to call him when the meeting was over and he would come over to MBB to pick it up.

I duly took the bottle to Munich. My meeting overran, so I made a local call to ask him what to do, "Leave it in reception and I'll pick it up in the morning, he said.

So I did and behind the desk was a gorgeous girl in traditional Bavarian dress. Not having good enough German, I explained slowly in English that the package was for a friend who would collect it the following day and added, "Do you understand?"

I asked where she was from and she told me, "The United States."

Her next three answers narrowed the location to a little town near San Jose, which she said, I wouldn't have hear of. I had learned her name by this time and suggested, "Try me, Elizabeth."

I don't know which of us was more surprised when she said, "Los Gatos," and I replied that my daughter was at that time doing a graduation year in Los Gatos High School, near San Jose, California.

The arm of coincidence is very long for me!

Other Random Posts:
A Coincidence Story
Married Couple In The Same Photo As Children
Coincidence Leads To Twins Reunion