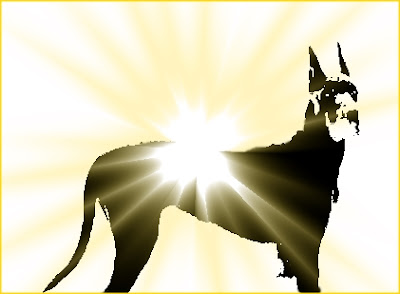 This makes a change - a black Great Dane dog acting as a guardian angel! Here is Raven's slightly spooky story.


My sister Carolyn and I were travelling from Florida to Georgia. It was dark out, and I will speculate the time to be around 4 a.m. We had recently got on the Florida turnpike and were south of Boca Raton, Florida.

Carolyn, who is a notorious interstate speeder, was travelling well above the 65 mph speed limit at the time.

I heard my sister say, "Now what is he doing out there?" and slowed down the car.

I looked over to the side of the road where she was looking, and asked what she was talking about. She replied, "That big black dog over there."

At the speed we had been travelling, we would have collided with one of the highway trucks and possibly killed.

When I later asked her about it, she said she saw a huge black dog, on the side of the road, and he looked like he was about to go into the lanes. She was driving a new Toyota, and knew if she hit the dog at the speed she was travelling, she would have almost 'totalled' her car, so to try to avoid him she slowed down. She claims she saw the dog the entire time she was passing him, and could see him in the rear mirror, I saw nothing,

She credits this 'dog' with saving our lives and looks at him to be a guardian angel.

I don't know what she saw, but I am glad she saw something.

Other Random Posts:
Fate Or Coincidence Brings Two Friends Together Over And Over
4000 Year Old Bird Drips Blood During War Time
The Meaning Of White Feathers As Messages From The Dead