67 Not Out Readers Coincidence Stories - 10

A few 67 Not Out Readers Coincidence stories today. My thanks to the contributors concerned.

Heathrow Terminal 5 Coincidence
I arrived late on a flight into London Heathrow's Terminal 5. As my mobile wasn't working I made my way over to the nearest pay phone to call my wife. To make the call I used a pre-paid phone card which I kept in my wallet.

I spoke to my wife and told her what time I would arrive home and then headed for the Gent's toilets, leaving my wallet in the phone booth.

I suddenly realised what I had done and rushed back to the phone booth, but there was no wallet to be seen. I started to panic a little as this held my credit and debit cards, cash and other important documents.

I wasn't too sure what to do and started walking around looking for a Lost and Found section or perhaps someone who could help me. Terminal 5 is usually very busy. I noticed a smart looking woman in a business suit and, for some unknown reason, picked on her to see if she knew if there was a lost and found desk.

She looked strangely at me and asked what the problem was and I told her about my wallet being lost. She asked what it looked like and I straight away told her without thinking as to why she would have asked this.

She opened her bag and said, "Is this it?"
I couldn't believe I had asked the person who had actually found my wallet out of all of the hundreds of people milling about. After I had verified it was mine, by giving her my name and descriptions of what was inside, she returned the wallet to me.

I offered to buy her a coffee or a drink and she said a coffee would be fine, if I would buy her a bun as well! We talked and I found out that she knows my wife's sister. It seems to be a small world at times.


Bumping into and old room-mate
In 1996, when I was 13, I went with my parents to the UK. One night in Scotland, my parents started talking about the University of Texas, where they had met. They are not sentimental or nostalgic, and this is the only time I can recall them talking about their college days. We left the restaurant, walked to the corner, and nearly collided with my dad’s old college roommate, whom he hadn’t seen in nearly 30 years! 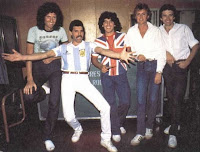 Queen reunited photo coincidence
My friend Andrew used to play in a Queen tribute band as a keyboard player. The band had been going for many years by the time he joined. Some time afterwards, the band were browsing photographs at the lead singer’s house. One photo contained all the band members taken at an actual Queen concert. But the photo had been taken before Andrew had joined the band, and at a time when he didn’t even know them. He just happened to be standing beside them at the gig, and got included in their photo by mistake.


A deal done on a train by coincidence
I'm a business man and had to make an appointment to meet a client I had never met previously. Somehow we just couldn't arrange a suitable time, either he or I wasn't available. So we agreed to leave things for ten days.

In between I had to take a trip to Manchester. On the way back I made it to the train on time and a man in a business suit sat opposite me. We got talking and it turned out that he was the client I had been trying to meet up with. We got on famously, had our meeting on the train and set up a possible deal which would be good for both of us.


If you have an interesting coincidence story you would like to have published on 67 Not Out please send this via the contact button at the top of the blog page. Will be happy to include a link to your own blog or website with the story. Thanks - Mike.