The Guest House And The Girl In A Bikini Coincidence 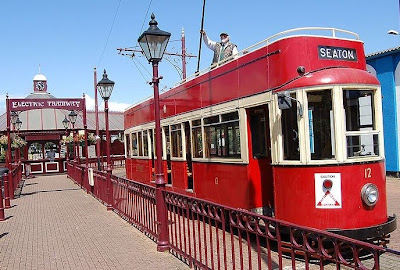 My wife reminded me of this coincidence or synchronicity from one of our weekend trips away.

We had driven to the seaside town of Seaton, parked our car in a side road and went off to see what the town was all about. After lunch we thought we had better find a Bed & Breakfast Guest House for three nights so we continued walking, but away from the coast.

We came across lots of B&Bs, but which one to choose? In this particular road it seemed that nearly every other house had rooms to let.

Karin pointed out a B&B that looked okay to her but I pointed to a different one. "Why?" she asked.

"The landlady is prettier," I answered.

Obviously I had no idea if this was true but we knocked on the door I had chosen. It was a while before someone answered. An attractive young woman of about 28 answered the door wearing a brief bikini top and some sort of thin, loose skirt type material. She had been sunbathing when we knocked.

She said her mother, who ran the Guest House, was out but she would show us a room. We followed her upstairs - which was an interesting experience!

The room was fine so we said we'd like to book it for three nights. She immediately gave us a key for the front door and one for our room - even though we hadn't paid her or had our car with us. We could have been anyone off the street.

Anyway, we went off to fetch our car and Karin said jokingly, "Trust you to pick that Guest House!"

We parked on the Guest House forecourt and let ourselves inside. The mother of the girl we had seen came out and I introduced ourselves. She was very friendly and told us that she was also called Perry and what's more she had a relation called Michael Perry - the same as me.

"Must be a different family though," she said, "as we all come from London."

We had told her we had travelled up from Cornwall. I went on to tell her that I was born in west London and my dad was a real cockney, born within the sound of Bow Bells.

We didn't really take the Perry connection any further.

That evening we went out for a meal and got back to the Guest House at about 10.30pm. The mother and daughter were about and we got talking. Karin to the mother and me to the daughter (she was by now fully dressed!).

She told me a lot about herself, as if we were friends, and how she had just split from her boyfriend and was sad about this. We then went off into the realms of positive thinking and spirituality. It seemed like she wanted someone to listen to her woes and I tried to keep the conversation positive.

We talked for ages and eventually Karin and I made our way up to our room.

The next day we saw the daughter in town and she was laughing and joking with a young man and they looked really happy together. She didn't notice us, she was so engrossed.

We had a lovely three days, the sun shone for us and that really is the end of the story.

We had the coincidence of me picking the Guest House, with the pretty girl, their surname being Perry and knowing a Michael Perry. They like me were originally from the London area. So it all fitted together nicely.

But coincidences and synchronicity isn't always just about us. In this case, for me, they confirmed we had picked the right Guest House. But perhaps we also chose that one as we had a role to play.

Synchronicity also comes about so that we can help others. I've no idea if what I said to the daughter was of any use to her or not. Maybe it was about Karin saying something or other to the mother. We never know who we help / hinder or influence by what we say or do.

Coincidences allow us to play our part, often without us realising.

The mother told us, as we were leaving, that the daughter had reunited with her boyfriend.