After 28 Years She Met Her Unknown Twin In Sweden 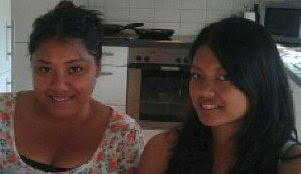 This is quite an amazing coincidence story of how Indonesian twins, separated when eight months old, find each other again after 28 years - living just 60 kilometres from each other in Sweden! Bizarrely there are other coincidences as well.

Completely out of the blue Lin Backland received a message on Facebook from someone claiming to be her twin - she didn't even know she had one! She thought the message was from a crazy person but mentioned it to her Swedish parents, who had adopted her in Indonesia when she was an eight month old baby.

There was nothing on the adoption papers to say that she was a twin. Even so she decided to answer the Facebook message, which was from Emilie Falk.

To cut a long story short, they eventually met up but didn't look alike. Lin said that, even so, "It felt like we’d known each other for a long, long time, even though we hadn't."

More meetings followed and because they both felt a strong connection they decided to have DNA tests to decide once and for all if they were related. The tests came back and, sure enough, it was proven that they were sisters and were therefore twins, both born March 18th, 1983.

The twins found that there were other coincidences other than them both now living in Sweden, just 60 kilometres apart.

~ They were both teachers.

~ They were both married on the same day.

~ They both played the song You and Me by Lifehouse at their weddings.

~ They both speak Skånska a Swedish dialect.

Their next hope is to try and see if they can trace any relatives in Indonesia but, says Backland, "We don’t really mind what we find - now that we’ve found each other again."

Further Reading:
They Meet Up Again After 67 Years
The Telepathy Of Twin Coincidences
Woman Donates A Kidney To A Stranger