The Great Unknown Link Between God And Man 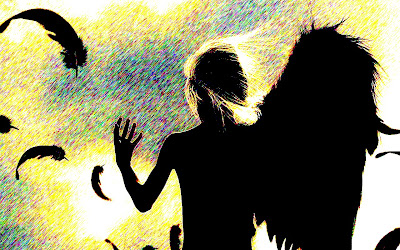 I have written previously about how How The Ancient Egyptians Sent Letters To The Dead and also how The Magic Of Our Ancestors Can Bring Us Success. On a similar theme I came across the following which was channelled by a medium and are said to be the words of a Dr Lascelles. It illustrates how our loved ones are with us and may also be able to help us with our problems.

I'll say first that I'm an 'undecided' about channelling, mainly because I have never personally witnessed anything convincing. I still have an open mind on the subject. No doubt, when the time is right, I'll get my answer. In the meantime here's what Dr Lascelles has to say:

"... there is a third existence between God and man. It is the great unknown link.

Between God and man there exists a whole universe of life which is active, benevolent, creative and positively real.

The existence of this stratum between God and man has little to do with what people think religion is. It is just a fact, as it is a fact that there is life on earth ... they are there and that is that.

This strata of life which I am referring to is inhabited by beings who were once as concrete in their formation as you are now. Actually they are still concrete and visible to each other. It is only that they have passed out of the wave band of vibration which you can perceive. Those beings have all lived an earth life and have passed through what you like to call death.

The inhabitants are all those whom you tend to think of as dead. They are not dead, of course, far from it, but they have terminated their period of activity on earth. They exist in great numbers and live lives which, in many respects, are not unlike yours. There is one difference they are aware of you, and they are concerned with life as they once knew it on earth, but you are not usually aware of them.

The spirits of the dead do exist and offer constant help. But do not imagine they can be prayed to. They cannot. You must pray to God and God will answer your prayers through the inhabitants of the invisible world ... The spirits or angels receive their power from the source of all power just as you do, and they stand as a bridge between the ultimate power and you.

Their invisibility and their apparent non-existence in the normal way must not blind you to the reality of their presence."

The Doctor admits that many prayers are not answered. The technique, it seems, has to be learnt. He continues by saying:

"The Bible tells us to approach the Lord in calmness and confidence. In such a manner must we approach prayer ... It is not necessary to kneel in a penitent pose of sad commitment. The affectation of a 'religious' voice is of no help nor is one required to adopt a confessional attitude ... Sit comfortably and as far as possible in a relaxed position. Lie down if you feel better that way. Sitting, kneeling and standing expend energy. Power is required and an extra supply may be induced from a state of relaxation."

"Remember that we only retreat into the orthodox attitude to God and prayer because we fail to see, hear and feel the presence of angelic beings. Were we convinced that actual angelic beings accompanied us during the day and were at hand through all our sufferings, we should feel no need for formalised religious teachings. We would simply know and, in knowing we would be complete."

And that's it for today, other than to thank my good friend Colin, who died a few years back, for leaving me this and other information.

Further Reading:
A Message Of Hope From The Angels
The Angels Solution To Our Problems
White Feathers Comfort The Bereaved