The Monkey Proves That We See What We Need To See 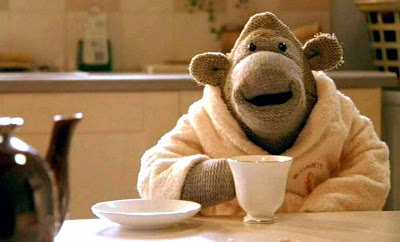 We see what we want or need to see. Take the PG Tips Monkey for example.

Being English I do enjoy my cup of tea and one of the brands we often buy is PG Tips.

I associate this tea with their television ads involving a monkey. Not a real monkey - though in less informed times they did use live monkeys - but a knitted toy. There he is, in all his glory, in the photo above.

About a week ago our daughter-in-law gave Karin a bundle of knitted bits. It turned out they were parts of a PG Tips Monkey. It had been like this for ages as somehow she was unable to finish off making the toy, the instructions aren't very clear. So she asked Karin if she would have an attempt. 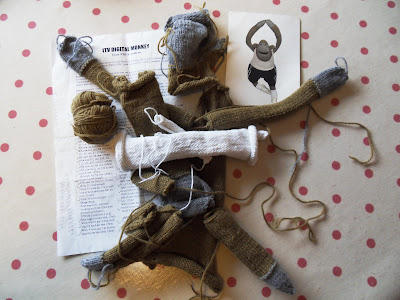 Karin likes a challenge but thought it would be easier if she could see an actual monkey that had been completed. But where could we find such a creature? They are not exactly roaming the valley where we live.

The next day we set off for a morning walk from our house and towards the end of our road was a van parked, delivering something or other. And sitting in the front window of the van was a PG Tips Monkey!

So lots of peering in through the window. Goodness knows what anyone would have thought if they had spotted us.

"What a coincidence seeing the monkey," said Karin as we continued on our way.

We passed a row of small terraced cottages and hanging in the window was - another Monkey just hanging limply by his arms. We thought we had better not peer in through their window!

"We are bound to see a third," I said, but no more were spotted hiding in the undergrowth or anywhere else for that matter.

That afternoon we headed to Truro City, about 15 miles from where we live. After doing what we had to do in town we walked into a charity shop to have a nose round. It was then that we spotted something looking at us. Yes, there he was, a fully formed PG knitted Monkey wearing a white T-shirt. He was quite tame so Karin was able to have a good look at his, erm, bits and pieces.

So that was our third monkey and that's what happens in life.

Once we send out strong thoughts about anything at all whatever it is will come into view. If, for example, you've ever talked to someone about a specific make of car I bet you'll see several in the next few days. It's the way of the world.

Of course the monkeys, cars or whatever may well have been there all along but get filtered out, otherwise we would overload our brains / minds with too much trivia. Once we concentrate on something the filters are switched off and whatever it is will come about. It has to, if the matrix created isn't destroyed.

We really do see what we want or need to see. This sounds simplistic but I believe it to be true. Visualise, send out a wish / request / need and forget about it. The result will follow especially if mixed with a pinch of belief - always a magical ingredient!

Now, it must be time for tea!

Further Reading:
Visualisation Of The Mystic Masters
A Pint Glass Will Only Hold A Pint Of Beer
The Secret Butterfly Visualisation