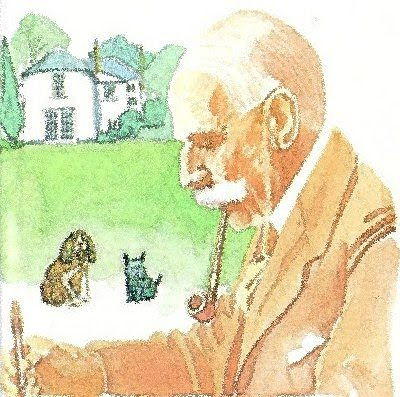 A coincidence story today by Michael Thurston on the website Beyond Religion:

"One night, I got off the train and was walking to my rented accommodation late at night. It was cold, and I was feeling very despondent, worried about my future job prospects. As I walked home, I phoned my brother and told him I was fed up with believing in God, life after death, and anything related, since none of it was relevant to my life. I went to bed with these thoughts and feelings.

During the night I had a dream in which I was at a formal meeting with scientists or philosophers wearing suits in 1920's or 1930's style. There was a long conversation during which someone asked me if I believed dreams could predict the future. I said yes, but no one in the group seemed to believe me. So I had to shout, "Yes, I do! Yes, I do!"

Then someone asked me who my favourite composer was. I said "Elgar." I don't know why I said that. I like him, but I listen to him very rarely, and if someone had asked me in my waking life, I would have suggested something a little more contemporary. This time they seemed to misunderstand me, and one of them repeated, "Agar...Agar?" so again I found myself shouting in my dream, "No, Elgar! Elgar! Elgar!" This act of shouting woke me up...and I had to fall back asleep again. Having been woken by my emotional outburst, the memory of the dream was very vivid to me.

The following morning I woke up and reached over to the radio to switch off the alarm. But I knocked the radio to the floor by accident, and the fall must have hit the on-switch. The radio, which switched itself on, immediately began to play music by Elgar. I was amazed! I got dressed and ready for work, and still Elgar's music was playing.

I later checked the radio programmes for that day in a newspaper. At the time I had woken up, a special programme (lasting about 2 hours) on Radio 4, devoted solely to the music of Elgar, had just started. At that time in my life I almost never listened to the radio."