Receiving Jewels And Other Gifts From The Invisible World 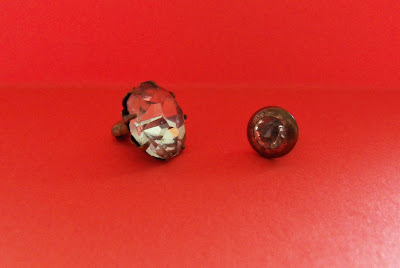 When I was much younger I liked to experiment with mind and psychic powers, telepathy, precognition and all sorts of similar stuff. My motto was 'If you don't try, you don't know.'

Instead of saying something was crazy or stupid I'd have a go - which took me down some strange paths.

One I remembered this morning was using a tele-transporter. My reminder was the two 'jewels' pictured in the photo above.

I'll tell you what this is all about if you promise not to laugh or mock!

I read about the tele-transporter in a book, the title of which or the author, is long forgotten.

You have to make this important piece of equipment yourself out of a sheet of card. You simply curl up the card to make the funnel like creation as I've tried to sketch below. And that is your fully formed tele-transporter! 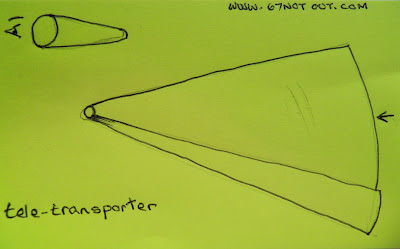 With this you can get in touch with the invisible world where all things are possible.

The book I read suggested readers should start off by requesting jewellery or diamonds from the aforementioned invisible world.

And this is what you do.

I have to say that some things are best done in private, using a tele-transporter is one of them! Otherwise you will be ridiculed by whoever catches you at it - the transporting, that is.

You write out something like the following on a sheet of paper or card:

"Bring me jewels beyond description. Bring me diamonds, rubies and emeralds. May they come to me from the invisible world. Bring me necklaces, bracelets, brooches, made of gold and valuable stones. In the name of creation I direct the invisible forces to fulfil my request. In the beginning was the Word."

Now look through the widest end of the funnel and read the words, preferably aloud, that you have written.

You can, of course, use your own wording - and for absolutely anything. I remember the book said that the tele-transporter was like a magnifying glass and would concentrate the words at speed to the invisible world.

Okay, I felt a bit stupid doing this, but I gave it a try.

Believe this as you will, but the very next day I found the two objects, as at the top of this post. Both had jewels and were definitely 'beyond description' as I have no idea what they are.

It looked like my tele-transporter was working. I therefore gave it another go. That weekend I went to visit my mother and by 'coincidence' she decided to give me my grandad's old fashioned gold and silver tie pins. 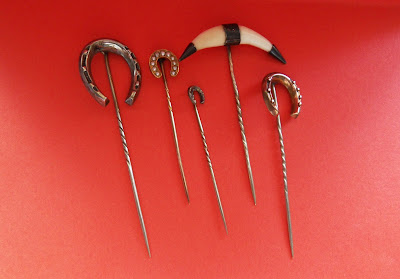 Again the tele-transporter seemed to work.

I tried a couple more times and nothing happened, perhaps my belief had dwindled. I then forgot all about this until I came across the two jewelled objects in a box.

The power behind such things is there and does work. If you say it doesn't it's because you haven't tried - go on, I dare you to make a tele-transporter!