Teaching A Dog To Read On A Bank Holiday 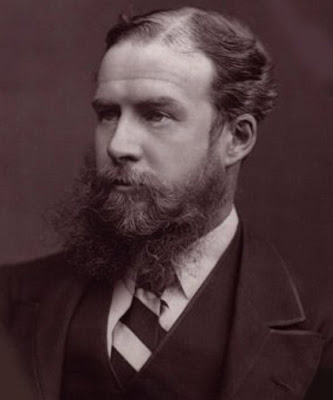 How doth the Banking Busy Bee
Improve his shining Hours?
By studying on Bank Holidays
Strange insects and Wild Flowers!

It was a public holiday yesterday (Monday Aug 27) in the UK, though we call them 'Bank Holidays'. We have to thank John Lubbock 1st Baron Avebury for this time off work.

It was because of Lubbock, a Member of Parliament, that the very first British Public Holiday was given back in 1871. It was, and is, a day when even the British banks close.

He was born into a banking family, and worked in banking besides being a Member of Parliament. His interests were varied and included entomology, botany, biology, archaeology, and ethnography. One of his mentors from childhood was Charles Darwin.

Lubbock saved Stonehenge! In the late 1800s a railway company wanted to run a railway with tracks right next to the stones. Lubbock put a stop to this, and it's horrific to think what might have happened without his intervention. Luckily he was interested in ancient civilisations and actually created the words 'neolithic' and palaeolithic.'

As for his dog that could read: he was sure that his dog, Van, was as intelligent as any child so he set up some experiments.

First he attached cardboard with the word 'FOOD' to Van's empty food dish. To get his meal Van had to take the cardboard to Lubbock. This went on successfully for several weeks.

Lubbock then hid the dog's dish and instead left ten pieces of cardboard each bearing a different word including, written on one card, FOOD. Van was able to select the right word to enable him to get his dinner.

Once Van had fully mastered this Lubbock taught him WATER, BONE and TEA. This moved on to OUT for when the dog wanted his daily walk. Sadly his dog died and his replacement was unable to repeat Van's success.

Lubbock kept bees in his sitting room - they had access through an open window - and also an ants nest in a glass case to observe insect behaviour.

The Victorian era is often much maligned in history but it created some interesting, pioneering individuals who altered Great Britain for the better in many ways - and perhaps had an influence on the rest of the world too.

Lubbock was interested in the average workers. One of his aims was 'to secure same additional holidays and to shorten hours of labour.'

Wonder where the politicians are today with such fervour and aims? I don't see too many about at the present time. In the UK the top echelons are filled with cloned posh boys with little knowledge of the real world. But once they retire, like Tony Blair and his missus for instance, they suddenly know how to cash in - ker-ching!

P.S. The verse about Lubbock at the top of the post was from Punch magazine in 1882.