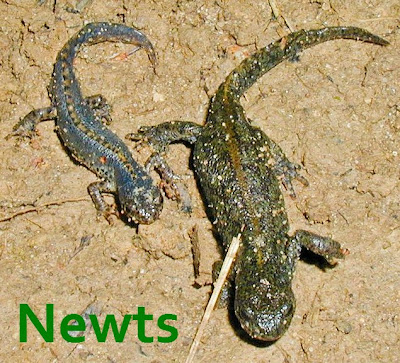 Is the following, by Jonathan, an example of suspended animation - in this case of a newt?


Back in 1976, my family moved into an old house. In the garden was a very old rockery, made up of paving stones and old bricks. A neighbour told us it had been there for many years.

In 1986, I decided to get rid of the rockery and create a shrub border instead.

It was hard work, as the soil was heavy with clay and the day was hot.

I chipped away at the soil with a spade for quite a while. Then, to my horror, I realised that I had chopped a newt in half. The newt was perfectly preserved.

After that I dug much more carefully.  To my surprise, I found two more newts, which I managed to extricate from the soil without damaging them. They were stiff and cold but looked otherwise to be in perfect condition.

I laid the newts on the grass, in the sunshine, while I filled a washing up bowl; then left them in the water while I continued to work.

After about twenty minutes I took a look at them and, to my amazement, they were slowly swimming around in the water.

To my mind this was a phenomenon, as they had been entombed in that hard soil for probably twenty years or more.

Was this an example of suspended animation?

Other animal posts:
Animals Have Feelings Too And Share Pain
The Woman Who Communicates With Animals
Evil Of The Devil And His Dando Dogs On Bodmin Moor