A How Did It All Begin Ramble 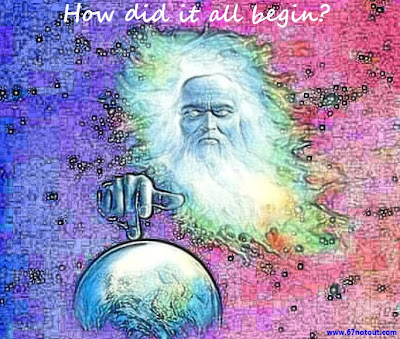 So how did it all begin? The universe and us, that is. Some will say it was all an act of God, a God who is immortal.

Others tell us of the Big Bang. Though Brian Yanny PhD, a research scientist from Illinois, says the Bang may not have been Big at all! His words:

"Current evidence suggests that, far from being 'big', the whole, vast expanse of space and all the visible galaxies and stars originated in a dense sphere of glowing gas much smaller than a pea."

Yes, but, as I was always asking as a kid: Where did the dense sphere of gas come from? Though I used to ask about 'gases'.

As we know life there is a beginning and an end but only God is immortal, well so the Bible says:

1 Timothy 6:16 - "Who only hath immortality, dwelling in the light which no man can approach unto; who no man hath seen, nor can see: to whom be honour and power ever lasting."

Okay! So those who say they have seen God must be telling porkies, if they believe in the Bible that is.

I've always felt that all of us, no matter how we actually started, will carry on for eternity but again the Bible disagrees, which must mean there is no Heaven or reincarnation.

Ecclesiastes 9:5 "For the living know that they shall die: but the dead know not any thing ..."

Ecclesiastes 9:10 "Whatsoever thy hand findeth to do, do it with thy might, for there is no work, nor device, nor knowledge, nor wisdom, in the grave, whither thou goest."

So that's not too comforting, is it?

Going back to 'where did it all begin'. I suppose it's because we cannot accept that the beginnings came from nothing, even if pea sized, is why mankind began to believe in a God or Gods. It seemed and seems the only answer.

There has to be some sort of everlasting, immortal universal mind. But, as many have said, man also creates God in his own image - as has been the case right from the earliest of civilisations.

So how did it all begin? I'm not sure. Supposing it was by God, what was He doing prior to creating our universe 14 billion years ago? Was He creating other Universes? Or something completely different?

My gosh, there are a lot of questions and I don't think anyone really knows the answers.

Sorry, if today's post is a bit of a ramble. I was just putting a few thoughts together and had no idea where they would lead.

Other 67 Not Out Posts:
20 Opinions For And Against God
Maat And The 42 Principles Of Life And Death
God Created Earth 6016 Years Ago