Coincidence Of The Free Lego Hawkeye 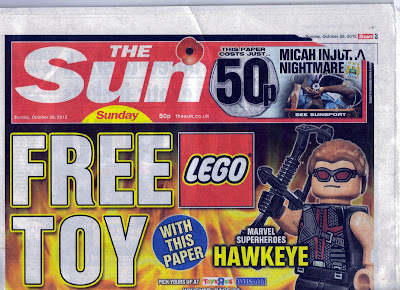 On Sunday we went to buy our normal newspaper and on offer, with another (down-market) paper, was a free Lego toy.

Our two year old grandson loves Lego so we hummed and harred if we should buy the Sun as well. As the figure had a weapon we decided we wouldn't.

Here's the weird bit though that I can't explain. When we got home there was a Sun newspaper - with the free toy - in our letter box. No idea how it got there.

Later that day our grandson arrived for a visit so we gave him the Lego (after his mum had removed the weapon. She thinks like I do about such things).

We're still puzzled where the newspaper and toy came from but it looks like Samuel was meant to have Hawkeye, a Marvel Superhero.

Random 67 Not Out Posts:
God Created Earth 6016 Years Ago
Manipulation By Powerful People Like Jimmy Savile
Discovering Where The Soul Resides