Magical Help To The Wool Shop 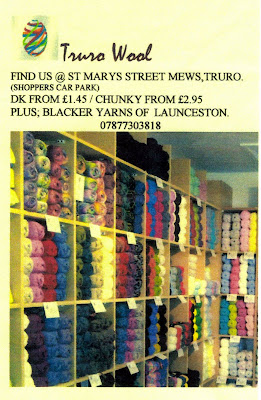 A routine sort of coincidence post today, hopefully not too boring!

My wife and I were in Truro yesterday, a town about 15 miles from where we live. We had done the bits we had gone there for and Karin said something like, "I wonder where there is a wool shop? I don't remember one in Truro."

The next minute, before I could answer, a woman handed Karin a leaflet, the one at the top of the post. "That's a coincidence," Karin said, "but I wonder where St Marys Mews is?" - which was the address on the leaflet.

There were lots of people buzzing about so Karin asked a passer by if she knew where this shop was. The woman answered that she'd just visited the shop a few minutes earlier and gave the best way to get to Truro Wool.

Our daughter-in-law is expecting a baby girl mid January and Karin wants to knit a cardigan for our new to be grandchild.

It turned out the shop had only been open for a week and they had the perfect pattern and wool that Karin wanted.

I said this was a routine coincidence post but, thinking about it, it was quite remarkable how everything fitted together nicely. Some days are like that aren't they?

But why is it that some parts of life work out perfectly, as if we are being helped? It's most likely because we are actually being helped. Just think, if this happened all of the time we really could attract everything we want.

Here's a theory why Karin was helped in this way yesterday. I think it was because she had just done a good turn for someone else. I won't go into details, but as is often said: we get back what we give out.

I always remember my mother telling me this as a small child. She helped someone who had a road accident and really put herself out - which wasn't exactly what I wanted to do.

Afterwards I asked her why she did all what she had done. She told me that one day we might want help.

Life is really quite simple.

Further 67 Not Out Posts:
Visualisation Of The Mystic Masters
Receiving Jewels And Other Gifts From The Invisible World
Key To Creating Our Desires And Conquering Pain With The Mind