The Lamas Way To Health, Rejuvenation And Virility 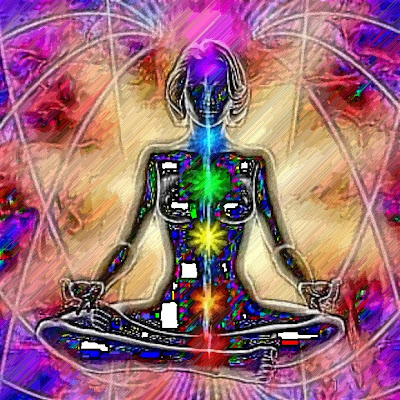 Most readers will no doubt be familiar with the main seven yogic chakras, or energy centres, within the body - as per the image above.

Today though I'd like to refer to seven vortexes within the body that are positioned differently to the chakras. Details of these have supposedly originated from Lamas in the Himalayas.

Their opinion is that these vortexes should revolve at great speed and when they are all revolving properly, at the same speed, this leads to perfect health, rejuvenation and virility.

First though, these are where the vortexes are said to reside within the body:

(1) The first is located deep within the forehead.

(3) Located in the throat at the base of the neck.

(4) Located in the right side of the body at waist level.

(5) Is in the reproductive anatomy and organs.

So how do we get all these vortexes spinning properly?

The answer is by spinning ourselves. Here's a description of how to do this from a 1939 publication:

'Stand erect with arms outstretched, horizontal with the shoulders. Now spin around until you become slightly dizzy. There is one caution: you must turn from left to right. In other words if you were to place a clock on the floor you would turn in the same direction the hands are moving.'

Okay, pretty straight forward but the text goes on to explain more detail:

'At first the average adult will only be able to spin around about half a dozen times until he becomes dizzy... To begin with practice only to the point of slight dizziness. As time passes and your vortexes become more rapid in movement you will be able to practice to a greater extent.'

The idea is to be able to build up gradually to a preferred 21 revolutions - though no more than 50.

One of the examples giving to the benefits of this are the Maulawiyah (there are alternative spellings) people often referred to as the Whirling Dervishes.

These Whirling Dervishes are seemingly noted for 'the virility of the old men, they are strong, hearty and robust. Far more than Englishmen are at their age."

All well and good (after maligning us Englishmen!) but according to the Lamas the Dervishes over-do the spinning. Keeping it simple, what this does is over stimulate the vortexes in the knees.

This is why the spinning should be preferably only 21 revolutions (and no more than 50).

So there we go, a way get those vortexes spinning for health, rejuvenation and virility.

I suppose I'd better add that the above is given as information only. Before starting any exercise program consult with your doctor or medical practitioner.

Other Healthy 67 Not Out Posts:
Tummo: The Yogi Power Of Warming The Body
The Up Hill Way To Live To 100
Kundalini The Serpent Of Adam And Eve