The Powerful Force Of Synchronicity 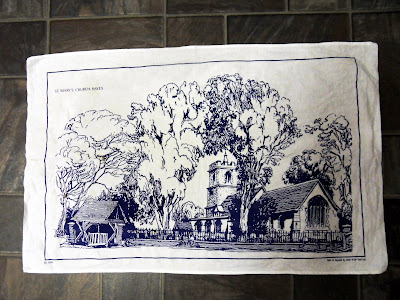 We were given some tea towels quite a long time ago and didn't really take much notice of them. Yesterday I was drying some dishes - yes, I'm house trained - and I asked Karin where the tea towel had come from as I hadn't seen it before. She explained how it was one of those given to us a while back and had never been used before.

I shook the cloth to take a look at the picture it had imprinted on it. "Crikey!," I said, "That's the church where I was Christened and mum and dad got married."

Considering how we now live about 300+ miles from the church it was some coincidence. So I laid out the cloth on the kitchen floor and took a photo.

St.Mary's Church is in the London Borough of Hillingdon. I know it doesn't look much like London but it's a quiet part on the outskirts which, in parts, is quite 'Olde Worlde'.

What's strange is that, as I mentioned a short while back, I have been researching my family tree recently and had been thinking about the area where I was brought up as a child. So I was quite surprised to see this church looking back at me. Karin could have pulled out any of the unused tea clothes.

The church has a history going back to at least 830 and the font, where I must have been Christened, is from the 12th century.

Looking for the above photo on Google led me by chance (huh!) to an old video from when I was about eleven years old. It showed the area where I used to live as a child and actually showed the flats where I lived at that time. It also took a journey through the town centre as I would have then known it. I was amazed to say the least! A step back in time.

As I said in the paragraph before the photo I had been thinking a lot about where I used to live as a child. One coincidence or synchronicity led to another and ended up with a multitude of memories and emotions.

Sometimes thoughts, helped along by synchronicity, are a powerful force.