Blake On The Green Bridge Coincidence 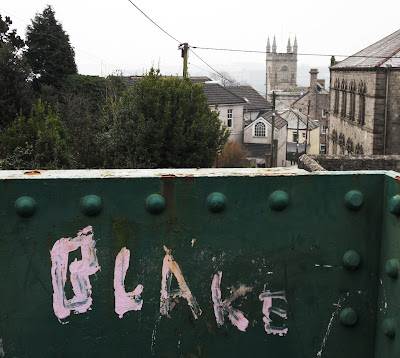 I had a problem with my health last year and was told I would need a check up (scan and x-rays) six months following this - which is sometime soon.

Yesterday Karin and I walked to town. We can do this in about ten minutes but took a longer route instead - about three miles - despite it being very cold.

We got talking about when my hospital appointments might be (as we want to arrange a holiday), and about the consultant I presumed I would have to see, a Mr.Blake. It gets confusing in the UK as they become a Mr. and not a Dr. once reaching the giddy heights of consultant and/or surgeon - not sure why.

As we approached town we had to cross a scruffy, green metal bridge over the railway line, by the station. As we got to the top of the steps we couldn't help but notice that someone had sprayed some graffiti - the word 'Blake'. I felt I should take a photo of this, as above. You can see the church in the distance.

After we reached town, and then finally home, there were two letters waiting in the post box for me: both via Mr.Blake with appointments for my scan and x-ray.

Okay, maybe not much of a coincidence or synchronicity, but it seemed one to me especially as I had felt it necessary to photograph the word Blake on the bridge.

Sometimes answers are out there as symbols, signs, animals and so on. It's up to us as to whether we want to see these, or even accept them, as being meaningful.