How weird, almost creepy that one stretch of road witnessed five crashes in just 24 hours and, what's more, this all happened at the same pair of cottages. No, there's seemingly nothing wrong with the road. A spokesman for the local council has confirmed this: "The road was resurfaced about three years ago and, on inspection today, no defects or unusual road conditions were found."

So what's going on? Who knows? It's just one of those things. Some would no doubt say it's all down to coincidence.

This all took place at a place called Evercreech in Somerset, England on the A371 - though Everscreech would seem a more appropriate name at the present time.

These are the details:

It was a quiet Sunday evening when a car crashed into a wall bordering Colin Brine's cottage. But more was to follow just minute's later.

This time another car left the road, wrote off Colin Brine's car in his driveway and then careered into his neighbour's garden hitting Steve Cobbin's front door. The woman driver was taken to hospital.

You would have thought that the odds against anything further happening were sky high, but the next morning three more vehicles either hit the same wall or a bank opposite the cottages.

So that totalled five crashes in 12 hours. Steve Cobbin, a teacher, said of the accidents, "We don't go in the garden any more," as he believes there must be a fault in the road. But, as already said, the council can't find anything wrong.

This isn't the first time that this has been an accident black spot. Mr. Cobbin also told the Daily Mail "Once a lorry dropped its entire load of beer into our garden." Seemingly this was back in 2007. 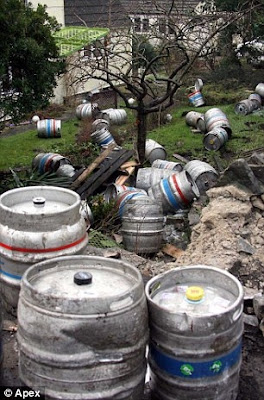 Mysterious as to how such things can happen at one particular place.