Telepathic Communication With A Duck 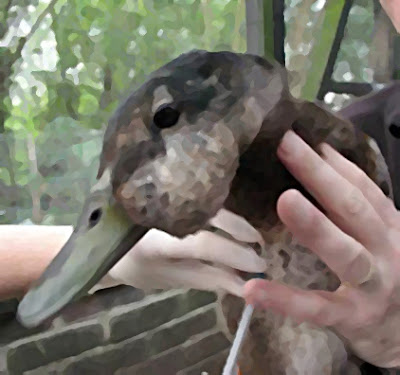 I haven't published a post about telepathy for quite a while so here's one from Chris Kelder. But it's a bit different as it's about telepathy with a duck! See what you think, the story was accepted in good faith.

I had a boyfriend called Peter who my mother thought was strange. He was quiet and shy but I liked him.

It took ages to get to know him and it took ages after this for him to even hold my hand.

One day we went for a walk by a lake, where it was very peaceful and lonely. It was here that we shared our first kiss and I think we could well have progressed on from there.

But we heard a noise and saw this duck hobbling along with difficulty. It was trying to fly but couldn't take off from the ground. Straight away Peter forgot me and said we had to make sure the duck was okay. He said the duck must have a broken wing and we should take it to the animal rescue centre before some other animal killed it.

As we tried to approach the duck it hobbled away and Peter was worried it would hurt itself even more if we chased him.

Peter told me to move well away from the duck which I did. He then sat down on the ground and closed his eyes and the strangest thing happened. At first the duck continued to waddle away but it then stopped, turned around and looked at Peter.

It then got more bizarre because the duck turned completely round and started hobbling towards Peter who was still sitting there with his eyes closed.

The duck walked all the way back to Peter and then sat in his lap. I couldn't believe what I had seen.

Peter stroked the duck gently, lifted it up and then we carried it back to the car and then took it to the animal rescue centre.

Romance was over for the day but I asked Peter how he did that. He said he communicated with the duck telepathically and told it he would do it no harm but would help it.

My mother was right in that Peter was strange but in a gentle out of this world way. Our romance never developed into anything serious and we drifted apart.

Other Random Telepathy Posts:
A Telepathic Link Or A Coincidence?
Who Is Pulling Your Strings?
Voices Told Woman She Had A Tumour