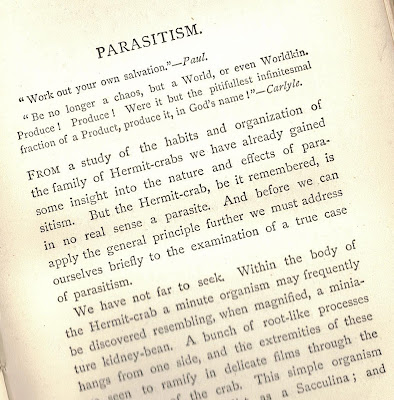 We can have hundreds of spiritual books but if we haven't actually experienced the content it's doubtful we have progressed spiritually. It's similar to distant places. We can read about them, but unless we visit them we haven't achieved very much. Attaining information for itself rarely makes us better people unless we put what we learn into action.

I was rambling on to myself about such things when absent mindedly I picked up a book I have mentioned previously in my post The Book And Suffragette Coincidence.

The book is called Natural Law In The Spiritual World and dates back to the 1880s. There is a signature inside dated July 24 1884.

The page I opened was in a chapter called Parasitism. I felt it linked me up to what I had been thinking:


"In those churches especially where all parts of the worship are subordinated to the sermon, a species of parasitism is peculiarly encouraged. What is meant to be a stimulus to thought becomes the substitute for it.

"The hearer never really learns, he only listens. And while truth and knowledge seem to increase, life and character are left in arrear.

"Such truth, of course, and such knowledge, are a mere seeming. Having cost nothing, they come to nothing. The organism acquires a growing immobility, and finally exists in a state of entire intellectual helplessness and inertia.

"So the parasitic church member, the literal 'adherent', comes not merely to live only within the circle of ideas of his minister, but to be content that his minister has those ideas - like the literary parasite who fancies he knows everything because he has a good library."

The chapter goes on to talk about someone who joins a church.


"What more likely than that a public religion should by insensible stages supplant his individual faith? What more simple than to content himself with the warmth of another's soul? What more tempting than to give up private prayer for the easier worship of the liturgy or of the church? What, in short, more natural than for the independent, free moving, growing Sacculina to degenerate into the listless, useless parasite of the pew?"

And it continues to say that:


"A physiologist would describe the organism resulting from such a process as a case of 'arrested development'. Instead of having learned to pray, the ecclesiastical parasite becomes satisfied with being prayed for. His transactions with the Eternal are effected by the commission. His work is done by a paid deputy. His whole life is a prolonged indulgence in the bounties of the church: and surely - in some cases at least the crowning irony - he sends for the minister when he lies down to die."

There's obviously much, much more but you'll no doubt get the picture. The author talks about how nature provides for all our wants.


"She gives him corn, but he must grind it. She elaborates coal, but he must dig for it ... He must work, think, separate, dissolve, absorb, digest: and most of these he must do for himself and within himself.

If it be replied that this is exactly what theology does, we answer it is exactly what it does not. It simply does what the greengrocer does when he arranges his apples and plums in his shop window ... but he does not help me eat them."

As that naff expression says: We have to walk the walk. We won't get too far if we simply sit and watch others walk.


Sacculina is a genus of barnacles that is a parasitic castrator of crabs.