Finding Helen Under The Rubbish Coincidence

My grandson, just three years old, is very much into the Fireman Sam characters and usually when he visits he'll bring along with with him toy vehicles - fire engine, ambulance and so on - and figures from the series. He excitedly had a story to tell when he arrived this week. 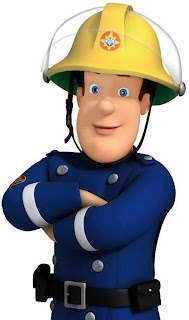 It seems that two weeks previous his mum had taken him to Cardinham Forest to meet up with friends and their small children. Along with him went a selection of Fireman Sam toys in his small rucksack.

But when they arrived home, after walking and playing, there was a problem - Helen was missing! For those not familar with Fireman Sam: Helen is Helen Flood - a Caribbean born nurse and mother of Mandy Flood. It looked like Helen had gone missing and was lost forever, probably somewhere in the forest.

After about two weeks later my daughter-in-law, along with my grandson, went back to Cardinham Forest to meet a friend again. There's a safe play area for the children while the mums can have a coffee or lunch.

Sammy, that's my grandson and not to be confused with Fireman Sam, was wandering about and looked at, what he called some rubbish. It was litter someone had left behind under a picnic table. Knowing him he probably wanted to put this into the litter bin.

But when he lifted the 'rubbish' guess who was hiding there? None other than Helen! Somehow she had managed to survive over two weeks in the forest. She probably knew she could rely on Sammy to return and find her.

It was meant to be!

Further Reading:
Hitting The Heights With Fireman Sam And The Stars In Somerset
Baa Baa Black Sheep Get Their Knickers In A Twist
Was This A Message Via An Antique Dog