The Grand Grimoire Lucky And Unlucky Dates For September 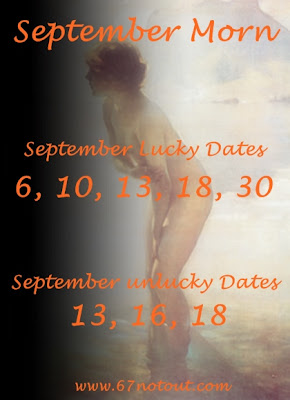 According to the Grand Grimoire each month has lucky and unlucky days.

The lucky days are supposedly the preferred days to cast spells.

It is claimed that The Grand Grimoire dates back to 1522 but, according to Wikipedia, it was possibly written some point after the 18th century. Other opinions say it may represent a translation of The Sworn Book of Honorius, a 13th-century text - but who knows!

Personally I feel that days are lucky or unlucky because of how we feel about them. In other words we make out own luck. In saying that there are still natural cycles where everything appears to go right (or wrong). It's on these day where we should perhaps either play to our strengths or alternatively maybe step back a little.

Have a lucky September!

Other Random Magic Posts:
Magic Which Brings Coincidence And Synchronicity
The Fortress Of Light: How to prevent a psychic attack
10 Posts Featuring Money In Synchronicity And Magic