The Incorruptible Body That Refuses To Decay Following Death 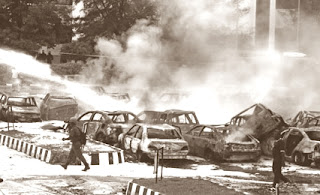 A story of a so called incorruptible. 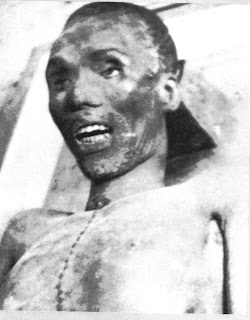 This is set in 1980 at the city of Kano in northern Nigeria. Followers of a heretic Muslim cult, led by a so called prophet, Muhammadu Marwa, also known as Maitatsine (which literally means The Owner of Curses) are reported to have caused a riot

Marwa had established his headquarters in Kano back in the 1960s and was said to have attracted over 10,000 followers. Tensions between his sect and the orthodox Muslims exploded into a riot in the December of 1980, during which over 5,000 people were killed, including Marwa himself.

Marwa was buried in a shallow grave but three weeks later the Governor decided that his body was to be exhumed and placed on ice at the city mortuary.

When he was exhumed rumour spread among the Kano population that Marwa's body was miraculously incorruptible, photo above - this is the phenomenon of dead bodies that do not decay.

Three 67 Not Out Random Posts:
The Doppelgangers Who Perhaps Should Have Been Born As Twins
Ephemeral That Makes Up A Life And Is Easy Forgotten
The Guardian Angels Waiting To be Summoned

Email ThisBlogThis!Share to TwitterShare to FacebookShare to Pinterest
Labels: History, Life After Death