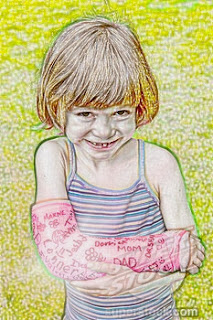 Here's a short coincidence story I received from JC, who often sends me bits and pieces of interest.


"So I'm on my way home from the local hospital with my five year old son and we stop at the local toy store to buy him something to commemorate the removal of the cast that has been on his arm.

He had to have two wires removed from his elbow, that were keeping the bone in place, which was a bit traumatising, but he made it through and we thought we should celebrate a bit.

Later, as we got on the bus to go home, I noticed a little girl ahead of us with a sling on the same arm and my son ended up sitting by her.

I politely asked her what had happened and it turns out that not only is the injury identical to my son's injury, she'd had the same operation, and had the wires removed on the same day at the same time and was now sitting on the bus with us!

Her father and I could only shake our heads while each of us pulled out little plastic bags with the removed wires in them that we were both carrying.

It was so strange, like almost not real. And the other weird thing is I feel like I've met them before.