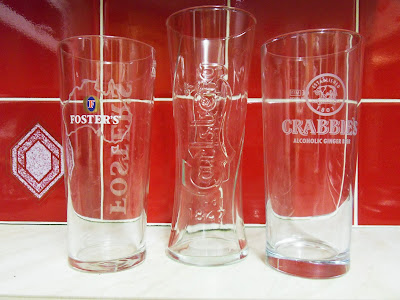 Over the past week we have found three glasses by the roadside: a Fosters, a Carlsberg and a Crabbies - as per the photo above. A coincidence or a new trend?

After we had found two we 'knew' we'd find a third. So what's happening? Are late night drinkers using their final pint as a take-away, so they can sup their drink of choice while walking home or on their way to the taxi rank?

We took the glasses home with us, put them in the dishwasher and we'll no doubt use them at some time or other. We have no idea what pub, or pubs they originated from.

I'd rather find glasses than all of those squashed Coca-Cola tins I wrote about before, but I suppose they are still a form of litter and have the potential to be dangerous if they were to get broken.

I can't see any real significance, with the coincidence of finding three glasses. Though I did read on the Science Nordic website that "three beers a day keep the doctor away." Mind you, on the Daily Mail website, I also read that "Just three pints of beer a week can dull your brain by 20%." You pay your money and take your choice!