Was The White Dove Messenger From Her Dead Mother? 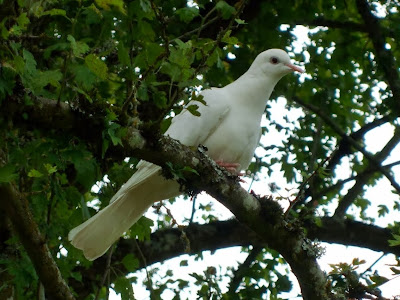 A further white dove story today to add to our collection - was the dove a messenger from her dead mother? The writer wishes to remain anonymous.


"My sister and I went to the cemetery to visit our parents, but particularly my mother as my sister is living a life of fear with good reason.

She was crying that she wished she could feel her mother's presence so I silently asked my mom to be with her. At that exact moment a beautiful white dove almost landed on my car but decided to land in front of it.

My sister said that it seemed to be 'checking out my car'. I started crying because I bought the car on the nineteenth anniversary of our mother's passing. I was in awe, when I realised my camera was in my car.

A couple, whom I hadn't seen earlier, were suddenly there and the woman asked if I wanted her to take a picture. When she did, the dove took flight and it was the most beautiful picture with its wings fully spread.

I grabbed my camera and suddenly there was the dove sitting in the tree above us. I talked to it as I took eleven more pictures as it 'posed for me'. When we left the dove followed us to the exit and was gone.

The woman who took the first picture emailed it to me and told me she and her husband stayed in their car for twenty minutes after we left and the dove never came back."