The Universe Chuckling About It Raining Cats And Dogs 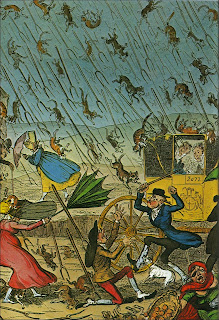 It's Sunday afternoon here in Cornwall and the rain is pelting down as I look out of the window. The old Arthur C Clarke's Mysterious World book was on my desk. I opened it up at random to page 46 and there was the above 19th century picture - showing it raining cats and dogs - precisely what I was thinking myself!

I often using that expression, though I see that the picture is actually called 'Raining Cats and Dogs and Pitchforks!'

Strange how sometimes what you are thinking or say comes about - with absolutely no effort.

I'd also been reading in the Sunday newspaper an article about Mike Rutherford the Genesis and Mike + The Mechanics founder. He was quoted as saying how much he used to like playing polo. To quote him:

"I once nipped off to practice [polo] when I should have been in the studio, and told the band I had a dental appointment. Naturally I came off my horse and knocked out my front teeth. The next day, I turned up and the guys all asked, "What kind of dentist did you see?"

The universe likes a chuckle!

P.S. Karin just put her head round my office door and said, "Have you seen how much it's raining?" "Yes," I said, "Cats and dogs."

Other Recent Posts:
The Ten Secrets To Living A Long Healthy Life
Psychokinetic Potential And Beating The Odds Of 7776 To 1
Mysterious Slither-Like Geoduck Clams Stranded On Cornish Beach Following Storms