A Materialization Seance With Sexual Overtones 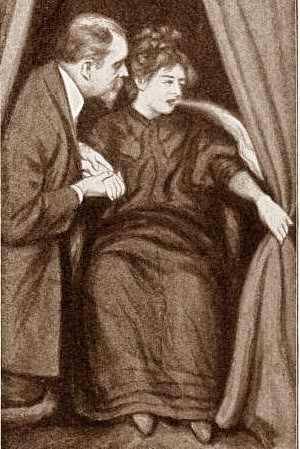 After writing about the disappearance and reappearance of such items as rings and white feathers in previous posts I thought I'd have a none too serious look at materialization generally.

Eastern adepts, for example, are said to be able to materialize objects such as food, precious stones and so on out of thin air. But materialization is mostly associated with physical mediumship.

Materialization through mediumship was at it's height in the late 1800s and early 1900s. Kate Fox of the Fox Sisters is said to have been able to produce full-form materializations. It's said that these even included the spirit of Benjamin Franklin.

The procedure for a séance followed a standard pattern. The medium would enter a cabinet so she/he could concentrate and collect sufficient psychic energy to produce ectoplasm. A face would then gradually appear or sometimes a full body. This 'spirit' would then circulate round the room before returning into the cabinet or would simply melt away. The medium would then be found in a state of exhaustion within the cabinet - her/his job done. 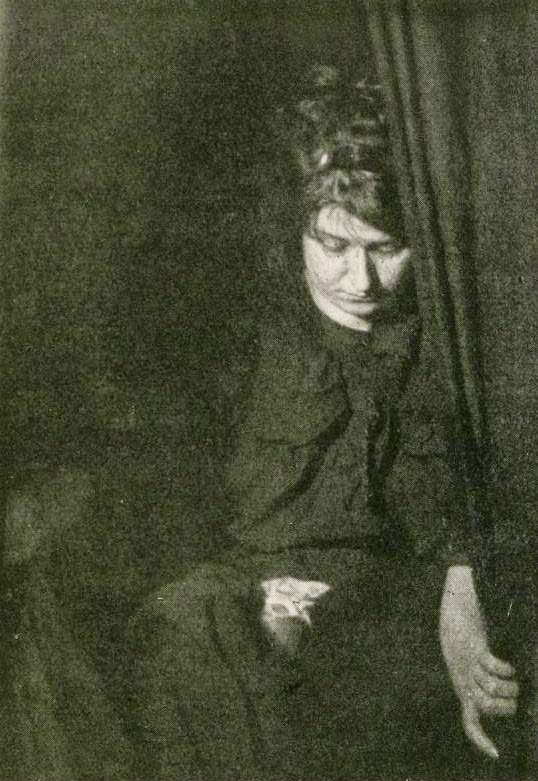 I researched the French materialization medium Marthe Béraud Carrière (photo above), who was better known by her pseudonyms of Eva C or Eva Carrière. She supposedly materialized the Indian Brahman Bien Boa - though some say he simply popped up through a trap door in her cabinet!

The researcher Charles Richet disagrees though, as he witnessed a gooey substance (ectoplasm) emerge from various parts of Eva C's body. This would gradually turn into the shape of a head or hand before retracting once more into her body. 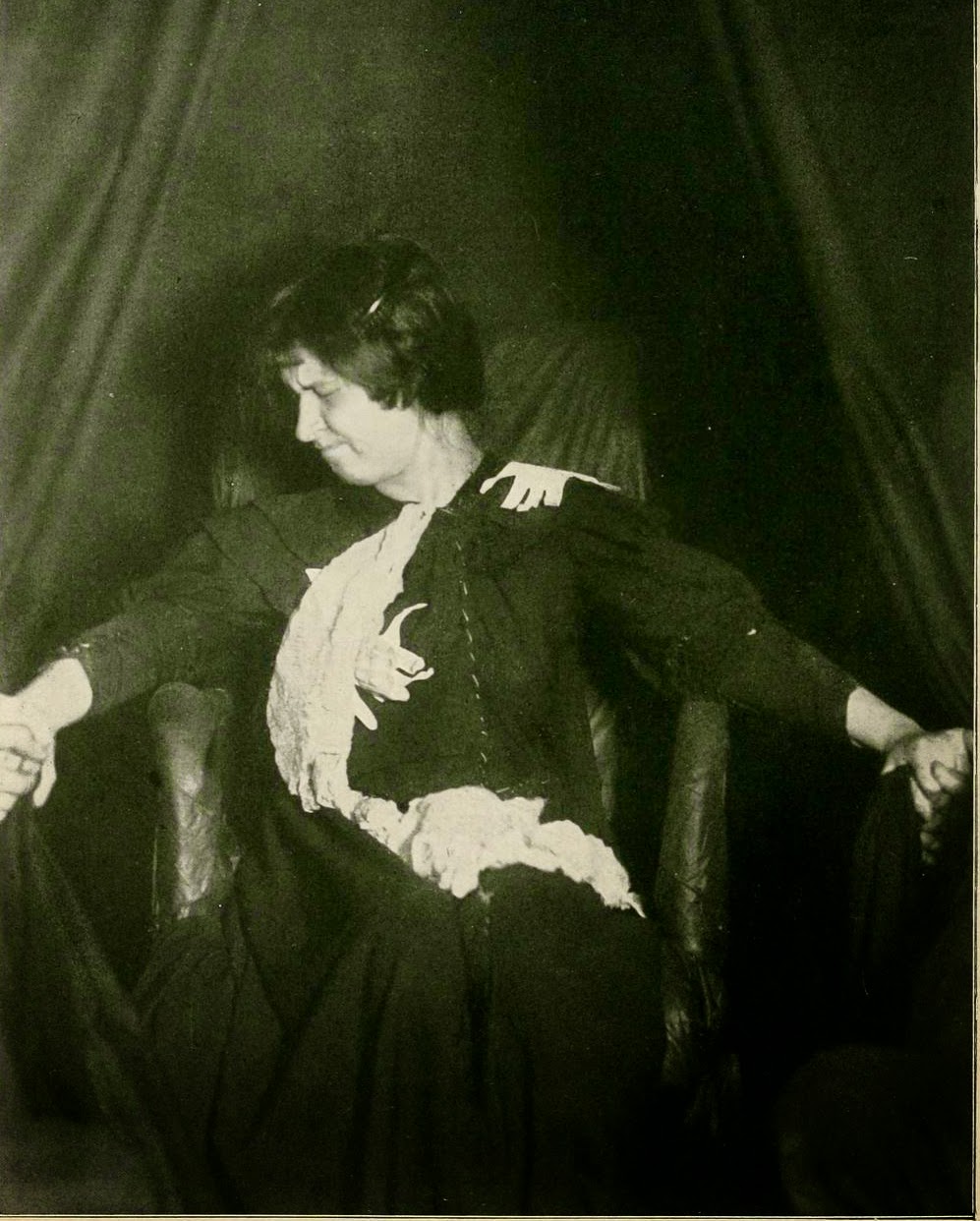 Who knows, some of this may have been genuine but instructions of how to prepare ectoplasm, and it's effects, were circulated between unscrupulous mediums.

One method suggested that 21 yards of fine white silk veiling be washed seven times. While still damp the fabric was to be dipped into paint, varnish, odourless benzene and lavender oil. The fabric was then dried for three days and washed with naphtha soap to remove any odours.

Fraudulent mediums were then told to to wear a dress (the female ones, that is) that was easy to take off, with two or three shifts underneath. The fabric could then be concealed in her underwear. The fraud relied on the sitters' gullibility and a belief that any investigators wouldn't be bold enough to want to search a female medium's underwear. 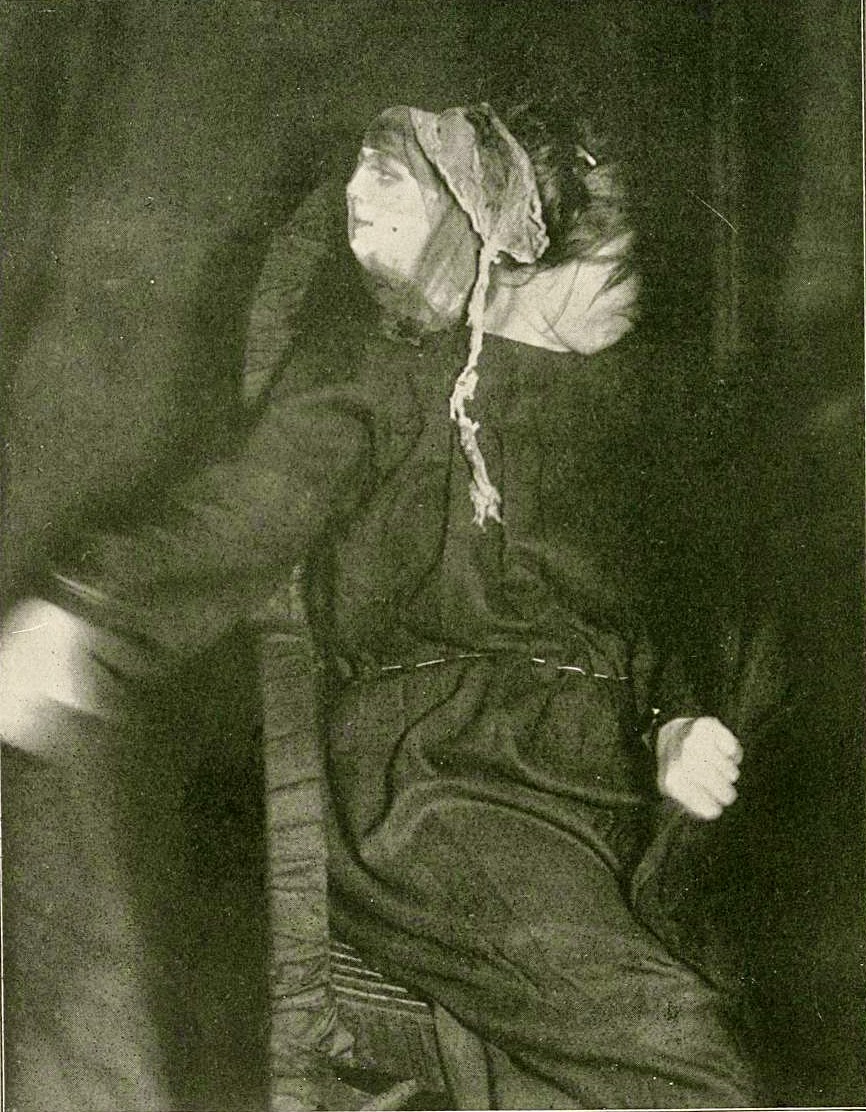 But going back to Eva C she brought some sexual content into her performance and wasn't as bashful as most in Victorian times. She was investigated by the psychic researcher Baron von Schrenck-Notzing - see his book Phenomena of Materialisation (1923), now in the public domain.

At demonstrations of materializations at séances - where Schrenck-Notzing was sometimes present - Eva C's assistant, Juliette Bisson, would introduce her fingers into Carrière’s orifices to verify that no ectoplasm had been placed there in advance. 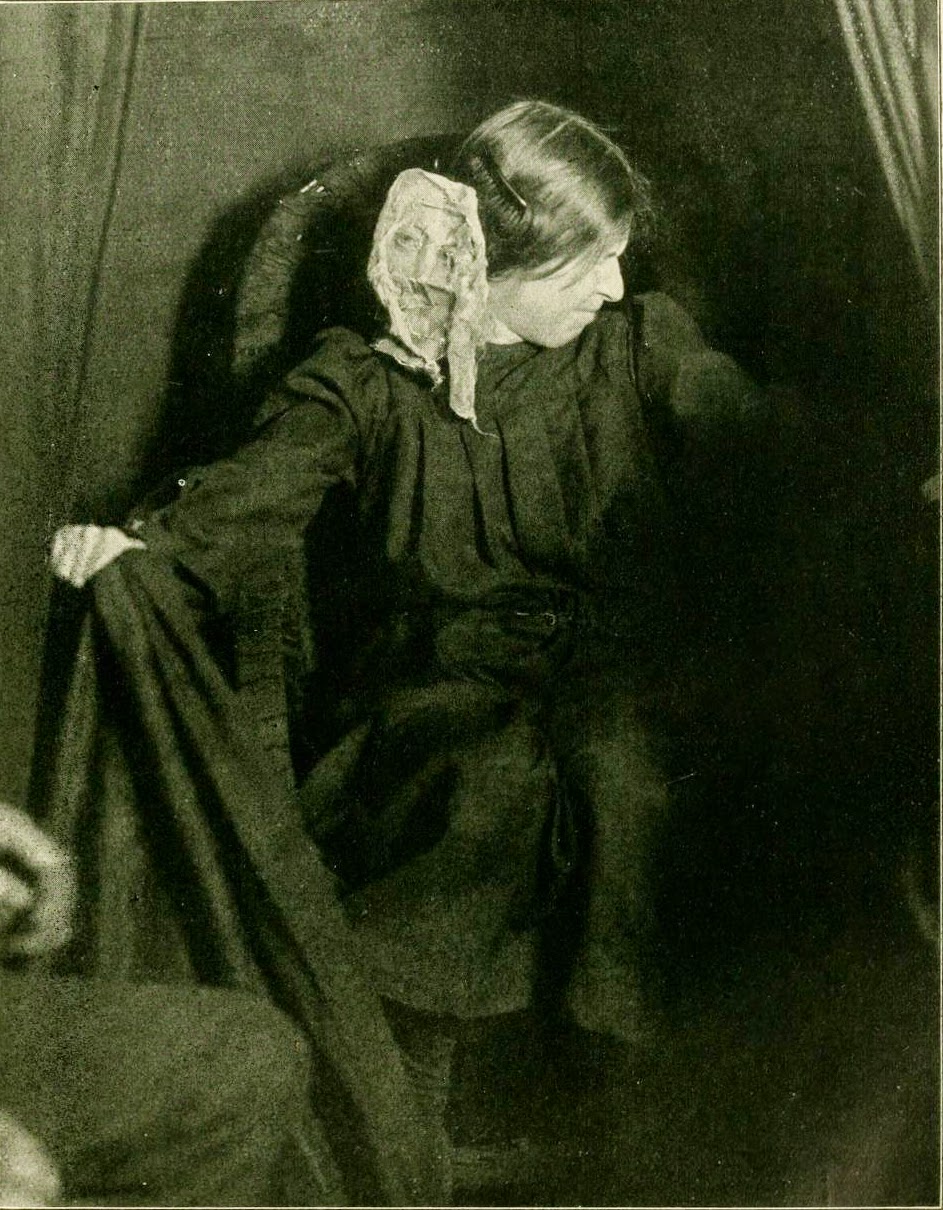 As a finale Carrière would strip naked and have a further, erm, lets call it a gynaecological examination. It's then said that Carrière would run around the séance room nude indulging in sexual activities with her audience. So von Schrenck-Notzing can perhaps be excused for not having his full attention on the investigation and therefore confirmed its authentiicity.

Although there were some definite dodgy goings on, respected mediums such as Madame Blavatsky and D.D Home were never found to have been fraudulent. We mustn't close our minds completely to these style of séances - there can be an element of truth, even where the waters have been muddied. 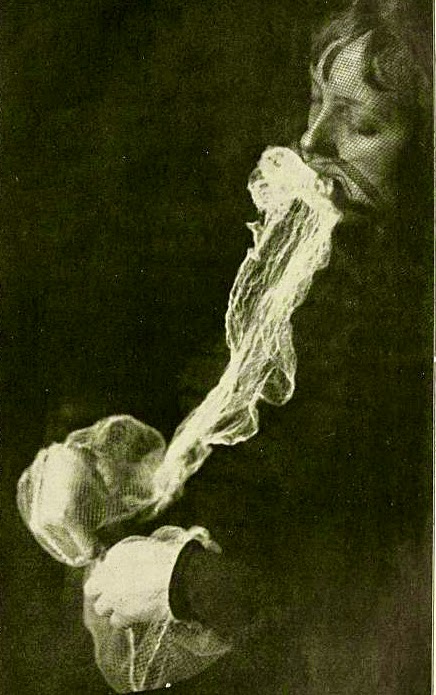 The photos on this post are from Baron von Schrenck-Notzing's book.

Other Random Posts:
The Mystery Of Wedding Rings Which Disappear And Reappear
Classic Photos Of Spirits And UFOs
The Ghost Photo Of The National Maritime Museum