The Rules For Revolution: Fact Or Coincidence Today 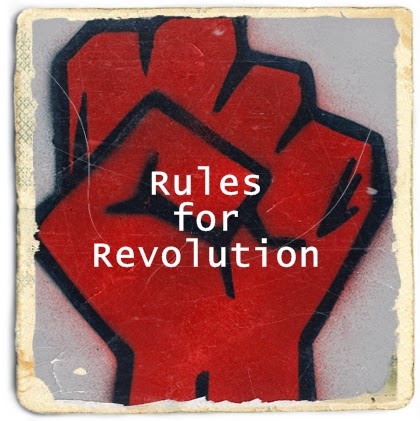 While writing the post about a dystopian world, The Sex Olympics Looks To The Future, I came across an article in the Washington Obersver Reporter from May 21, 1970.

The article is titled Separating Fact From Coincidence and refers to something from 1919 ... but here's what it said, so you can read it for yourself:


"Coincidence has a way of kicking fact out the other side of the bed, but it is often a real problem to know whether a given set of circumstances is based in fact or coincidence.

For what it is worth, we follow here a 'set of rules' which was purportedly obtained by Allied Forces at Dusseldorf, Germany in May 1919. The examples being used here are from the 'Communist Rules For Revolution'.


So, do those rules have any relevance to the situation in the western world today? Back in 1970 this is what the writer of the article seemed to think:

It is obvious that the reason for the reurrection of these 'rules' and their circulation - in this case by an American Legion post - is that by accident or design, many of these rules are being followed in this nation.

The church is weakened by the falling away of the young. Can anyone deny the pervading interest in sex? We do dwell on athletics: our shelves are filled with books which are pornographic or borderline cases; and plays and movies rush to 'X' ratings. We are divided into hostile groups. We hold our leaders up to contempt and ridicule. Certain groups obviously reach ruthlessly for power. There is big spending government, inflation, rising prices. We have strikes, civil disorders and a paternalistic government attitude toward both. We have a campaign for the registration and licensing of weapons, and what every happened to honesty, sobriety, continence, and the word was bond?

The question is whther there is a connection between the Red 'rules' and what is happening here.

Some of both, we expect, but would be unable to divide it to our own complete satisfaction much less the satisfaction of every reader.

It does, however, make a real exercise in thinking for everyone."

I don't agree with all the unnamed writer says but he or she is right in that it's food for thought.

A lot goes on behind the scenes that we tend to think of as simply the modern way of life. But I wonder how much has been manipulated for the benefit of some corporation or group.

(It's interesting that David Horowitz wrote of Barak Obama's Rules for Revolution - the link is to a pdf version.)

Random Recent Posts:
With Whom Do You Consort During The Hours Of Sleep
Valletta: The City Built By The Knights of the Order of St John - 19 photos
A Materialization Seance With Sexual Overtones

Email ThisBlogThis!Share to TwitterShare to FacebookShare to Pinterest
Labels: Coincidence and Synchronicity, Revolution