Be Careful What You Wish For: A Warning Tale 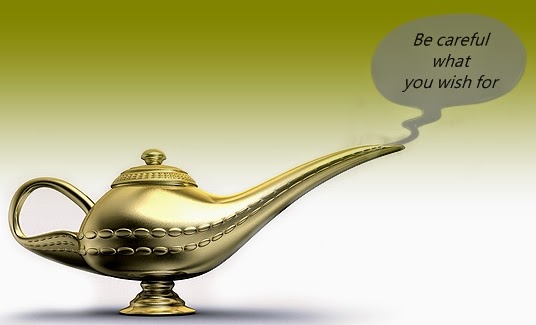 Here's a coincidence story which illustrates how we should perhaps be careful what we say or wish for. 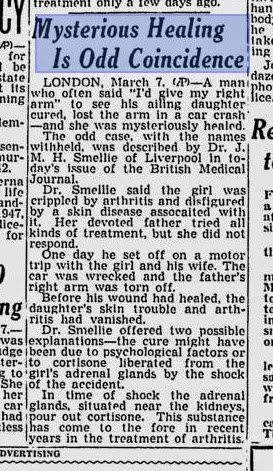 A man who often said, "I'd give my right arm," to see his ailing daughter cured, lost the arm in a car crash - and she was mysteriously healed.

The odd case, with the names withheld, was described by Dr JMH Smellie of Liverpool in today's issue of the British Medical Journal.

Dr Smellie said the girl was crippled with arthritis and disfigured by a skin disease associated with it. Her devoted father tried all kinds of treatment, but she did not respond.

One day he set off on a motor trip with the girl and his wife. The car was wrecked and the father's right arm torn off.

Before the father's wound healed, the daughter's skin trouble and arthritis had vanished.

Dr Smellie offered two possible explanations - the cure might have been due to psychological factors or to cortisone liberated from the girl's adrenal glands by the shock of the accident.

In time of shock the adrenal glands, situated near the kidneys, pour out cortisone. This substance has come to the fore in recent years for the treatment of arthritis.