Seeing Deceased Loved Ones In Your Dreams 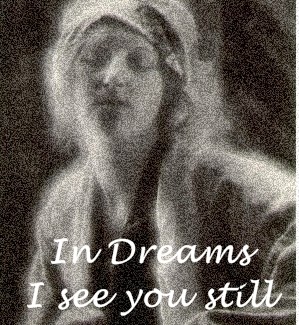 , Tony Parson's writes, "Sometimes I think that the dead live in dreams. Heaven, the afterlife, the next world, whatever you want to call it - it's all in our Dreams."

I must say that partly I agree with what he says.  There have been occasions when I have seen loved ones, who have been very close to me, in my dreams. Nothing on a regular basis, but they appeared real enough for me to remember them years later.

The character in Tony Parson's book, Alfie, says after dreaming of his wife, Rose, who was killed in an accident, "And I still don't know what to make of those dreams - were they just the product of loss and imagination and grief? Or was it really her? They didn't feel like something that I had made up.  They felt far more real than most of the waking days of my life."

In a way that's how I felt too. I can't say why, or how but the loved ones I have seen in my dreams I believe were in fact them - still alive, but in another dimension.  Maybe they have access to our world for a short while after they have passed on and are able to leave us messages in our dreams and perhaps in other ways too, as I have written about previously.

From my experience we are more likely to have contact with the dead in dreams just after they have died. Or maybe when we are about to move on ourselves from this life.

Tony Parsons isn't an author I would usually read but someone, who was moving, gave my wife a load of books - about thirty or forty - and I picked out one to read by 'chance' - as I felt like reading something easy and relaxing for a change.

Other Posts:
20 Examples Of How The Dead Contact Us With Messages Or Signs
The Meaning Of White Feathers As Messages From The Dead
The White Dove As A Messenger Of The Dead

Email ThisBlogThis!Share to TwitterShare to FacebookShare to Pinterest
Labels: Dreams, Messages from the dead